Keke Palmer to launch new book in Miami for charity 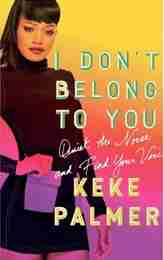 “We aren’t chained to anything but our own mind’s limitations.” – Keke Palmer

MIAMI – Driven to break down barriers and defy definition, Keke Palmer became the youngest actress to receive a SAG award nomination in a lead actor category, the youngest talk show host in history, the youngest and first black Cinderella on Broadway, and the first black female to star as Marty in the movie version of “Grease: Live” (the Fox special that won an Emmy). She has been a trailblazer from the start and now she’s bringing her talents to Miami to benefit a local charity.

Palmer recently penned a new book entitled, “I Don’t Belong to You,” which she will be launching in South Florida. She is slated to visit the magic city, February 8- 10, for a series of events designed to empower girls, young women and mothers presented by her Miami-based charity of choice, The Embrace Girls Foundation, Inc., in partnership with Miami Dade County Public Schools and District 2 Board Member, Dr. Dorothy Bendross Mindingall’s Office.

As a child growing up in inner city Chicago, Palmer wowed family and friends with original performances in her grandmother’s kitchen. It wasn’t long before she found herself on the big and small screens wowing wider audiences in films like “Barbershop 2” alongside Queen Latifah, “Madea’s Family Reunion” alongside Tyler Perry and “Akeelah and the Bee” (for which she earned her second NAACP Image Award).

Then came another breakthrough as she became the highest ever paid African American child actor in Nickelodeon’s tent pole series “True Jackson, VP,” and the list has gone on. But Palmer is no longer a child and this is evident in “I Don’t Belong To You.” In the book, Palmer will surprise people with her honesty and perspective on topics such as: sexuality, race, anxiety, depression, family dynamics, faith and finding love.

At 23-years-old, the wiser-than-her- years Palmer has been the architect of her own destiny. Through her writing, she candidly shares the many bumps and roadblocks she has faced and knows many from her generation are facing today.

Palmer encourages people to overcome struggle, find their voice and dare shine their light as brightly as possible with an “I ain’t mad atcha” attitude. It is a manifesto for navigating the rough terrain of today.

With transparency and humor, Palmer has developed the unique ability to connect. In her debut book, she endeavors to guide the reader to become the hero of their own story and be of service to others.

“As long as I can remember, way back since my “Akeelah and the Bee” days, my family and I have supported The Embrace Girls Foundation,” Palmer said. “So anything I can do to bring awareness to the charity and support their awesome programs and those gorgeous girls, I make the time to do. I can’t wait to share my story from my lips with them.”

The series of events include: a VIP Welcome Reception including an evening cocktail reception, dancing, a meet and greet, personalized book signing and a chat with Palmer; an “All Girl All Power! Love, Laugh & Learn Pep Rally,” where more than 1,000 girls from Miami Dade County Public Middle and High Schools will jam to the latest tunes and hear from empowering and inspirational speakers including Palmer and her mother, Sharon; and a Girl Talk – Live Discussion streamed on social media.