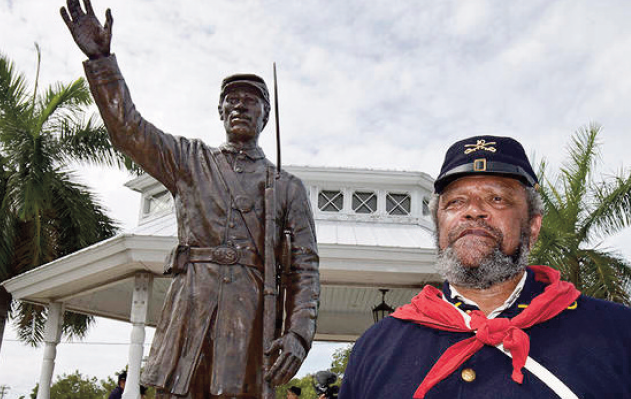 KEY WEST, Fla. – A memorial was unveiled in the continental United States’ southernmost city Tuesday remembering its African-American residents who served in a Union regiment during the Civil War.

Called “The Forgotten Soldier” and installed in Key West’s Bayview Park, the bronze sculpture depicts a uniformed soldier holding a rifle, with one arm upraised. Its dedication marked the 153rd anniversary of the date in 1863 when more than 120 black soldiers from Key West were instructed to report for duty.

“The unveiling of the sculpture is huge for the city, because it tells a piece of the story of Key West’s involvement in the Civil War that had previously not been told,” said Key West City Commissioner Clayton Lopez, who spearheaded the ceremony.

Key West was the only southern city to remain in the Union throughout the war. It was headquarters for the Navy Gulf Blockading Squadron against Confederate shipping.

As attendees laid yellow carnations at the base of the sculpture, a Civil War reenactor gave a “roll call” reading of the recently rediscovered names of African-Americans from Key West who served in the 2nd South Carolina Volunteer Infantry.

The sculpture was commissioned and donated by 99-year-old Key West businessman Ed Knight, who appeared visibly moved during the ceremony.

“Today, as I see that statue unveiled, it will fulfill one of the desires of my heart and they will no longer be the forgotten soldiers,” Knight said. “They will be the unforgotten soldiers.”

Next post Common software would have unlocked shooter's iPhone