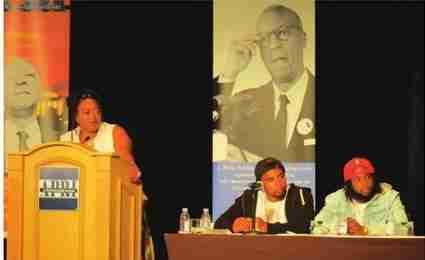 Panelists at the A. Phillip Randolph Institute’s (APRI) 48th Annual National Education Conference listen to feedback from the audience during a question and answer session.

As one of the largest black labor organizations in the nation, APRI brought in various experts who covered a range of topics including improving conditions for black workers, making economic gains and combating failing educational policies.

Hot topics that many speakers rallied against were racism and the efforts of U.S.Secretary of Education Betsy DeVos to expand school choice, calling it an attack on the public school system that serves many of America’s most vulnerable students.

“Our job is to help every child no matter what,” said Michael Mulgrew, president of the United Federation of Teachers, while telling a story about a principal he encountered who said he only wanted to target the best and brightest students for his school.

“You are not getting rid of our kids and if that’s what you think education is about, you should have never gotten into it. … Let’s stay woke, let’s resist, and let’s react,” Mulgrew said.

“You have an office in the White House, an office of white supremacy … what they want to do is reverse the DNA of this country and take us back (to the past). That is worth fighting for,” Gebre said. “I didn’t just start resisting when Donald Trump got elected, I’ve been resisting all my life.”

“Here we are in 2017 and we’re reverting back to the 40s and 50s … They don’t want us to be engaged because when we stay woke, they shook,” Deggett said quoting New York slang that means to be shocked, scared or surprised.

Deggett also tearfully shared that his kids knew nothing of racism and quoted Tupac, whom he called his favorite poet, urging attendees to “spark the brain” of the students who will change the world.

“Unemployment is stressful. Poverty is stressful. Not knowing where you’re going to live or where your kids are is stressful. If you want to improve the health of the community, deal seriously with these issues, with these stressors,” added Phil Thompson, another speaker.

Sharpton served as one of the conference’s keynote speakers. In his usual fashion, he encouraged attendees to get on the front lines of change by impacting government policies.

“If you’re not changing laws then we’re just having a big, backyard barbeque,” Sharpton said regarding having meetings that don’t result in follow-up action. Though there were a lot of South Floridians at the conference, attendees also came from as far as Chicago and Los Angeles to participate. In addition to the panels and breakout sessions the four day event included awards and recognitions to several individuals, a cyber café, a gala and worship service.

PLEASE NOTE: This story was updated at 6:34 p.m. on August 11, 2017 to correct that Joy-Ann Reid was not in attendance at the conference.