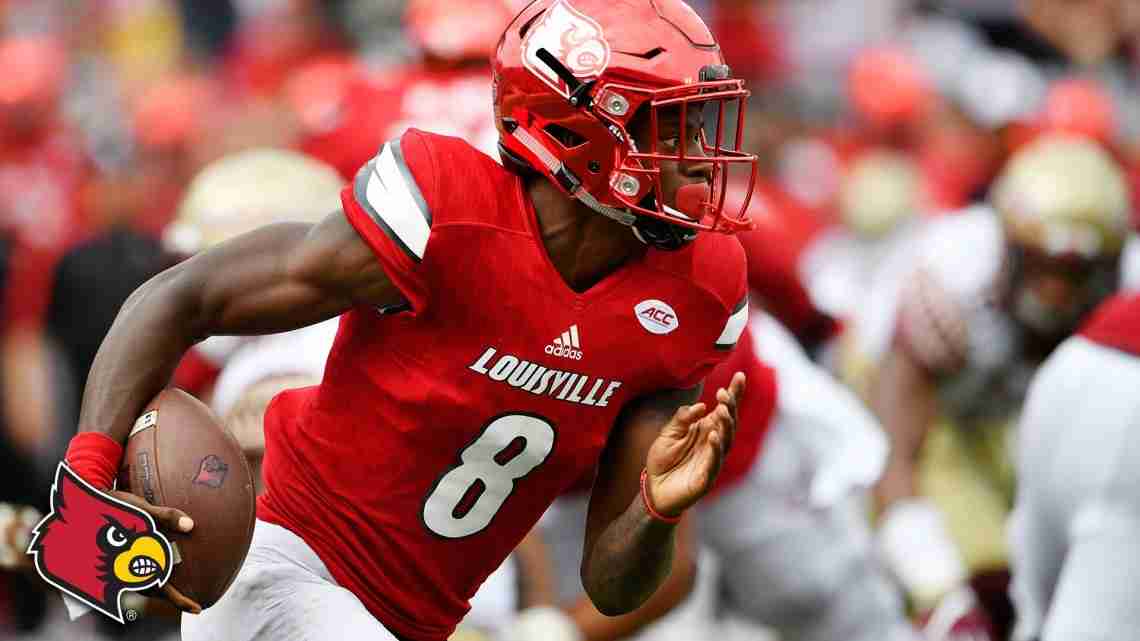 By GARY B. GRAVES

LOUISVILLE, Ky. – For someone who is not completely comfortable in the spotlight, Lamar Jackson, from Pompano Beach, Fla., has come to embrace it all: the speeches, the truckload of trophies, even all those tweets about his outfits.

But after a week of awards shows, interviews and photo opportunities, the Louisville sophomore quarterback returns to Louisville as The Associated Press college football Player of the Year, the latest addition to his haul of postseason awards.

The 19-year-old opened the season by accounting for a school-record eight touchdowns against Charlotte before his highlight-reel goal-line hurdle over a Syracuse defender the next week, a game in which Jackson totaled an ACC-record 610 yards. During a five-TD out- burst rout of Florida State he showcased his improvement in the pocket and quick, nimble footwork in a statement win for the program.

“His ability to picture plays is something that he really worked on and got better at,” Louisville coach Bobby Petrino said. “One of the things that is really neat was how he became a leader during the season.

“I can remember a couple of times in practice where he would look at me and go, ‘he was short on that route.’

And I would say ‘yes, yes he was.’ And I would go ahead to the receiver to correct him and Lamar goes, ‘that’s OK, coach. I got him.’” The 6-foot-3, 205- pound Jackson has passed for 3,390 yards with 30 touchdowns and rushed for a school-record 1,538 and 21 scores. His combined TD total broke Watson’s Atlantic Coast Conference record of 47 set last season, and he established single- season conference rushing marks for yardage and TDs by a QB.

After earning ACC honors from media and coaches as the league’s top player, Jackson last week won the Maxwell and Walter Camp awards. He’s still trying to get his mind around the deluge of individual accolades and attention — especially being a Heisman winner.

Jackson has the chance to become just the second repeat Heisman winner and first since Ohio State’s
Archie Griffin (1974 and ’75). His goal remains leading Louisville into championship playoff contention after the Cardinals (9-3) fell short this fall.

“The attention has been like that all year, and I just can’t go out as much,” said Jackson, who will lead Louisville against No. 19 LSU (7-4) on Dec. 31 at the Citrus Bowl in Orlando. “This just motivates me to elevate my game.”

Jackson, from Pompano Beach, Florida, is eager to resume bowl preparations for the game in his home state after a week of media appearances and awards shows in Atlanta and New York — where his fashion choices took over social media.

His outfit during his Heisman coronation: a red velvet jacket with black lapels, black bow tie and black suede loafers adorned with menacing yellow eyes, which he says represented his fierce look from inside his helmet.

Initially reluctant to wear the shoes, Jackson relented and now laughs about the attention they generated.

“I showed my teammates the picture of the shoes and they said, ‘you gotta get them,’” Jackson said. “I was like, ‘I don’t want to wear them,’ and we debated about it and talked about it, and it just went from there. It’s fun.”

Hard to imagine this impressive whirlwind would be anything other than fun, especially considering Jackson could do it again at the ripe old age of 20.

Next post Kwanzaa: A Celebration of Family, Culture and Community