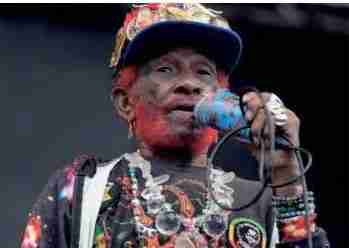 WEST PALM BEACH, Fla. – Eccentric producer and Grammy winning reggae and dub artist Lee “Scratch” Perry is gracing South Florida with his presence in celebration his 81st birthday and to mark the four decades since he released his landmark album “Super Ape.” He will kick off his U.S. Tour in West Palm Beach and Miami – his first South Florida shows in a decade.

They will also perform brand new music like their latest single “Black Ark Vampires” and other classics from Perry’s work with the likes of Bob Marley and Max Romeo.

Perry has been overturning tradition and confounding conventional wisdom for more than five decades. In the process, the widely acknowledged father of dub reggae became arguably the first creatively driven “artist-producer” in modern recorded music.

In 2004, Rolling Stone Magazine ranked Perry on their list of the 100 Greatest Artists of All Time.

Born in Jamaica in 1936, Perry began in the music business in the 1950’s and by the 1960’s became known for his innovative production techniques, as well as his eccentric character.

His first single “People Funny Boy” in 1968 was notable for its innovative use of sampling as well as a fast, chugging beat that would soon become identifiable as “reggae.” Concurrent with his own releases with the Upsetters, Perry produced numerous reggae artists at his Black Ark studio, including Bob Marley and the Wailers, The Heptones and Max Romeo.

After his famed Black Ark Studio was consumed by fire, Perry took refuge in England and the U.S., performing live and making records with collaborators from a wide range of musical genres, all artists who had been inspired by his work.

Among them were British dub producers Adrian Sherwood and Mad Professor, punk legends The Clash and Public Image, the Beastie Boys, and in recent years the Rolling Stones’ Keith Richards, Funkadelic’s George Clinton, rocker Andrew W.K., electronic artists like The Orb, and of course NYC bass music specialists Subatomic Sound System, who back in 2007 collaborated with Dubblestandart on Scratch’s first dubstep remixes.

Now he’s returning to South Florida to delight audiences with his signature sound. Both shows will take place in January 2018 in West Palm Beach on Jan. 12 at Respectable Street and in Miami on the Jan. 13 at The Ground.

Tickets are available at HeroesLiveEnt.com.