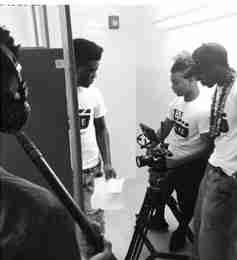 Students in the 1st Take Film Program shoot scenes for a movie.

MIAMI – Florida Film House (FFH), in partnership with youth-based organizations Urgent, Inc. and Gang Alternative will launch another three-day film workshop near the end of 2017 for young people ages 12-18 who live in challenged and underserved communities.

At the end of the experience, students will have completed a short film to share with family, friends and audiences at next year’s Urban Film Festival, set to take place August 30 through September 3 in 2018.

“These kids are very creative and very talented and even at this young age, I’m amazed at their ability to tell a story, their story,” Grullon said. “I really appreciate their willingness to express and expose their stories to me. Participating in the 1st Take Youth Film Program is my favorite part of the job.”

The workshops kick off with tools and insight from industry professionals who teach the fundamentals of filmmaking. Then students are divided into teams consisting of producers, directors, writers, actors and editors – and each team is assigned a script outline.

“In two days, we provide a solid foundation for developing a project from script-to-movie before they even pick up a camera,” explained line producer Peter Ebanks, a regular instructor with the program who has produced projects that have premiered at the Cannes Film Festival, Miami International Film Festival, Palm Springs International Film Festival and many others around the globe. “We teach them about character development, script breakdown, budgeting, scheduling, everything from pre through post production.”

On the third day, youth film, edit and learn techniques to complete the project.

“It was so much fun,” said 16-year-old Marcus Williams, who participated in workshops earlier this year. The Edison High School senior and Urgent, Inc. Rites of Passage intern thanks 1st Take for instilling in him a passion for film. “I get to use the equipment and create my own films and public service announcements.”

When asked what’s needed to make the program a staple in Miami-Dade County, Marco Mall, FFH’s executive producer, weighed in.

“Quite frankly, we need supporters to expand our program. We’re very proud of the relationships we’re establishing with local youth programs that appreciate what we offer to their students,” Mall said.

“We’re discovering and molding the next Barry Jenkins (Oscar winner and Miami native) or Blademil Grullon, and we need help to achieve that goal.”