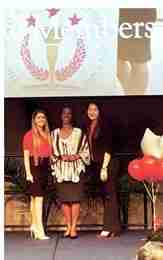 Cheri Perry, center, was inducted into the National Society of Collegiate Scholars for outstanding academic achievement.

On Sunday, October 22, a 54-year old great grandmother made history as she became one of the privileged students (and the oldest in the group) to be inducted into the Florida International University’s (FIU) chapter of The National Society of Collegiate Scholars (NSCS).

According to their literature, The National Society of Collegiate Scholars is the nation’s premiere organization for high achieving students. Founded in 1994 at The George Washington University in Washington, D.C., membership in NSCS is by invitation only and is offered to students who carry a 3.4 or higher grade point average.

There are active chapters at more than 330 colleges and universities across the country, in all 50 states, the District of Columbia and in Puerto Rico. FIU’s chapter was founded in 2001.

She’s a “chip off the old block” in that her father, who has since passed on, became the first Black soldier to graduate at the top of his class in Officer Candidate School (OCS) at Fort Sill, Oklahoma where he received his commission as 2nd Lt. Gerald E. Howard.

When she came to Miami at the tender age of 10, she was informally “adopted” by the President of the Urban League of Greater Miami, Mr. T. Willard Fair, who helped mentor her and eventually appointed her to the Board of Directors of the Liberty City Charter School, where she served with then Governor Jeb Bush, who also saw great potential in her.

In fact, Governor Bush requested Perry go to Tallahassee in 2001 to start his reelection campaign, which he won in November, 2002 – becoming the first Republican in Florida history to win a second term. Perry was peppered by the press as to how she could support Jeb, who Democrats had claimed to be a racist.

Perry, herself a Black woman and a Republican, politely put a reporter in his place. Then she returned to Miami to support Jeb who handily won re-election.

A talented scholar and aspiring writer in her own right, Perry will be closer to retiring from the legal industry, so she can put all her energy into writing and publishing her work after receiving her Bachelor’s degree in English in December.

She comes from a long line of writers. Her grandmother, who passed in 2015 at the age of 94, was a retired university professor who had published several books, one of which chronicled the life of Birmingham, Alabama Civil Rights Icon, Emory O. Jackson.

And her mother, Barbara Howard, is an accomplished writer as well. Yes, if you have not guessed it by now, Perry, who I call Cheri, is my eldest child – my first born. So I am extremely proud of her and have been for a very long time; especially when she decides to do it on her own and not trade on my name and reputation.

There have been so many people who have helped her when called upon, including people like Bob Graham, before he became Governor of Florida, the late William “Bill” Turner when he served on the Miami-Dade School Board and then went to the Florida Legislature, and of course, Fair, who considered her one of his own.

I can’t begin to thank all the people who helped me with my daughter since we moved to Miami in 1974. You see, as a young divorcee, I became a single mother raising three children. And all my children excelled, showing the results of hard work and faith in God.

Cheri and her husband, a retired plumbing contractor and disabled Army veteran named Carl Perry have raised seven children, 10 grandchildren (one on the way), and three great grandchildren (with another on the way). They also have a large extended family. And most of them live on what I call the family compound.

In the midst of all these people, Cheri has successfully maintained a full-time job with a very busy litigation firm, come home and managed a household, studied and done homework and maintained a 3.7 plus GPA to become a national collegiate scholar.

Who wouldn’t be proud? That’s my baby! Thank you Father!