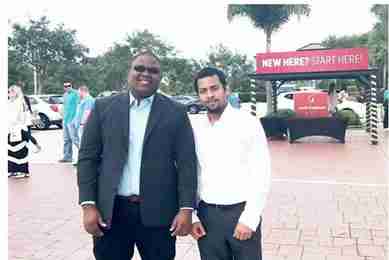 It all began in 2010 when Ally Simbert, a computer science freshman at St. Thomas University, discovered his ability to fix and resell used laptops and cell phones for a higher price than he had purchased them.

Simbert, a Haitian immigrant, had great success and eventually became a leader in the Miami electronic trade-in market.

In 2015, while studying to receive his masters in computer engineering at FIU, he decided to go national. Simbert, 25, started ‘Stopoint’ – a national company that specializes in buying and selling used electronics – with his twin brother Steeve, 25, and best friend, Marc Estinville, 26.

Stopoint had a rocky start. There were times when the company only received one phone call a day, but last year that all changed.

Today, the trade-in company is quickly growing and has received national recognition. Stopoint was recently featured in The Wall Street Journal for its fast, easy and safe service.

“Stopoint’s bragging point is speed. Stopoint will pay you via PayPal within 24 hours of receiving your device (or mailing a check to arrive within three days),” Nathan Olivarez, a writer for Wall Street Journal, reported.

Simbert said the fast and secure service is the reason the company has generated nationwide interest from media. In addition to the Journal, publications such as CNET and The Huffington Post have covered Stopoint.

He said the company’s goal is to continue to provide the fastest payment in the industry, have good customer service and become one of the biggest electronic trade-in companies in the nation.

According to Simbert, people are starting to wonder why they should wait 10 days for payment from other trade-in companies when Stopoint pays customers within 24 hours after receiving their device.

Within the next year, the founders plan on increasing sales to make Stopoint a $10 million company. They hope to be worth $300-$500 million in the next five years.

Nadiesha Gooden, 26, a customer service representative at Stopoint, said she has noticed a substantial amount of growth while working for the company.

Gooden said the founders work very closely with everyone so that their employees understand the business and can give the utmost professionalism in customer service.

“We’ve grown so much in three months that we can beat (competing) companies within a year or so, because of how fast we’re growing,” Gooden said.