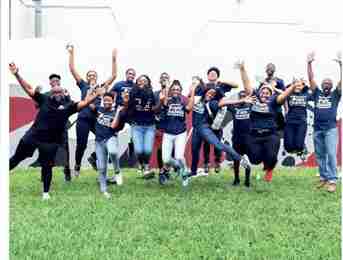 Among them is L.E.A.D (Leaders by Empowerment-Activists by Development) Nation, which in collaboration with the Urban Collective, the producers of Art Africa Miami Arts Fair and I Am Art MIA, celebrated 15 years of being an integral part of the mentoring movement on Monday, the official Martin Luther King Jr. Holiday.

The collective group worked to expand quality mentoring opportunities at their beautification and mural painting day of service at Watkins Elementary School in Pembroke Park.

Local officials, students and the community had the opportunity to add paint to the mural designed by artist Chivas Davis.

“Over the past fifteen years, mentoring has gained so much momentum, in large part due to National Mentoring Month,” said Adrian Freeman, Executive Director of L.E.A.D. Nation. “Mentoring is a critical part of developing positive relationships within our community – mentoring is proven to have a positive effect on academic, social and economic outcomes for our young people.” “I Am Art was created to provide a canvas for people to express themselves artistically,” said artist Earl Silias Jr., who founded the organization in New York. “With the numerous outlets for adults to express, enjoy and transact in the art world, I Am Art Miami was curated specifically to provide a showcase for young artisans, grades K- 12.”

Jones beamed with pride when referring to his mentees in the L.E.A.D Nation program Monday.

“5 months ago, 15 students committed to going on a journey in becoming a L.E.A.D. Nation Fellow. Today, they planned their FIRST community day of service, and it was a success. Shout out to the students and parents for understanding that SERVICE is more than just a “project,” but it’s a lifestyle. We are jumping for joy for what’s next!” he posted on Facebook.

Research shows that nine million young people in America will grow up without a mentor. National Mentoring Month is designed to help combat that statistic by providing the opportunity for unique engagement from community members interested in becoming a mentor.

This year, with the support of the mentoring community, the public is encouraged to go beyond just digital engagement – and become involved in making a real life impact.

According to research, mentoring relationships are at their best when connections are made between a caring adult and a young person who realizes someone is consistently there to help guide them through tough life decisions.

Each year since its launch in 2002, National Mentoring Month has enjoyed the strong support of President Barack Obama and the United States Congress.