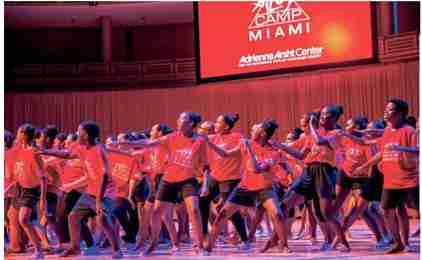 For 14-year-old North Miami resident Janasia Johnson, life seems surreal at the moment. Nicknamed, Jojo by her aunt, the well-spoken teen just had the experience of her lifetime.

On Tuesday, Johnson, along with Jairo Ontiveros, the Arsht Center’s Director of Education and Community Engagement, received the 2016 National Arts and Humanities Youth Program Award from First Lady Michelle Obama on behalf of AileyCamp Miami. The award is the nation’s highest honor for creative youth development programs. The Miami camp was recognized for its effectiveness in promoting learning and life skills in young people. It was one of 12 awardees chosen from a pool of more than 251 nominations and 50 finalists.

Johnson told the South Florida Times as she was boarding a plane to return home Wednesday that she still couldn’t believe her fortune.

“I’m so excited! I can’t believe it actually happened. I know this will forever stick with me and it just felt like it’s still a dream,” Johnson said. “Accepting this award from First Lady Michelle Obama was an incredible moment for me because she is someone I look up to so much.”

The experience is even more significant special because Johnson has overcome major adversities to get to where she is today. A student at SEED School Miami, Johnson was raised by her grandmother after her mother went to jail when she was in second grade. Her father was always absentee.

She remembers her mother being very involved before she was incarcerated.

“I grew up with my grandmother and my mom was always there. She would give us money, come to my activities at school and always spend time with us,” Johnson recalled.

Once her mother went to jail, Johnson said her grandmother had to work hard to provide for her and her siblings so she felt like she was on her own.

“When my mom left I didn’t have the same support. I had to figure out how to do things for myself and I was frustrated,” Johnson said.

That frustration led her to start acting out. “I was angry, but it was really sadness. I felt like no one was there,” Johnson said.

This past summer, Johnson enrolled in AileyCamp Miami’s six-week program. She credits a special teacher, Deborah Magdalena, with helping her cope and process her emotions.

When I came to AileyCamp Miami, it wasn’t just dance. I took creative communication and personal development classes,” Johnson shared. “Ms. Magdalena taught me how to express myself through writing. Every day she would have us write something. She would notice when something was wrong and pull me aside.”

Johnson said the creative communication teacher challenged her and helped her learn how to present her poetry, which she’d been writing for some time. “She told me I had a gift and I needed to use it,” Johnson said.

The second oldest of her mother’s four children, Johnson said her family is extremely proud of her and told her she’d made family history. She said her mother’s words over the phone particularly moved her.

“I talked to Mom twice so far. She told me she was so proud of me and to know we are doing good makes her life brighter and better,” Johnson said.

Held at the Adrienne Arsht Center, Ailey- Camp Miami is a free summer program that uses dance as a vehicle for developing self- esteem in young students. Students learn four primary dance forms – ballet, modern, West African and jazz. The camp’s six-week program provides 100 children, ages 11-14, with a performing arts experience they would not otherwise have. It has served over 800 children since the program started in 2009.

Students also learn communication skills and take personal development classes focused on everything from body image and nutrition to conflict resolution, bullying and drug prevention. Tuition, transportation, meals and dance wear are free for campers. It was one of the final programs created by the late Alvin Ailey.

Alvin Ailey’s current Artistic Director, Robert Battle, is a native of Miami’s Liberty City community. He said he was thrilled to have Ailey’s life-changing program in his hometown receive such a recognition.

“Miami is where I grew up and was first touched by Ailey’s Revelations. Because of where I’m standing now, I’m living proof of the impact of that exchange on a young person.

I see myself in the faces of the young students in AileyCamp,” Battle said. “I’m beyond thrilled that the Arsht offers this valuable program in my hometown and that it has received a preeminent honor at the White House given by our First Lady.”

Johnson is proud to among the hundreds of students impacted by the program. She aspires to be an anesthesiologist and model; and wants to attend Spelman College in Atlanta. Her experience with meeting the First Lady and attending AileyCamp Miami have given her the confidence she needs to reach for the stars.

“I’m very grateful that I was chosen out of a million students. Since I was able to do this, I know there are many more things in life I will be able to do,” Johnson said. “I can’t keep hindering myself. I have to go out there and see what’s out there because it can help me grow. I will keep growing.”

Next post Chalmers hoping his comeback chance is coming soon