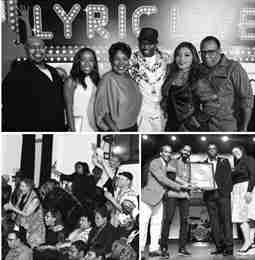 Lyric Live has become one of the most popular entertainment events in South Florida. Once each month, crowds gather at the Lyric Theater in Overtown for a night of fun, music, entertainment and competition as artists compete to be named the winner of the show. The season culminates in a competition that brings the winners together to duke it out once more for the coveted overall season winner.

The atmosphere was electrifying at the Black Archives Historic Lyric Theater on Friday night. The fans yelled at the top of their lungs and the emcee, comedian Chello, couldn’t call a winner. It was the Lyric Live All Star Season 3 finale competition.

The crowd voting for the winner yielded a tie three times. Each contestant performed twice and it was down to the finale’s two contestants, Sarah Gracel and Terrence VesSoul.

Gracel and VesSoul both sang their hearts out and the crowd was at an impasse. At one point, the crowd chanted “Sarah, Sarah, Sarah” throughout the 100 year old theater; but it was up to the celebrity judges to decide who would go on to reign as the night’s winner.

It all came down to an unprecedented vote by the judges – JoMarie Payton, LeLee (SWV), Michael Sterling, Cedric Hollywood, Kevin Evans, and Katrina Bush (WSVN). VesSoul who was donned as the Season 3 champion; winning a $1,000 cash prize, a photo shoot with A. Freeman Photography, and a Branding & Marketing Consultation with Hip Rock Star Advertising.

“The Showtyme Junkanoo band is bored tonight because all of the talent was phenomenal,” said emcee Chello to the spirited crowd at the Black Archives Historic Lyric Theater. Other finale contests were Kandira Bailey, Tina Gilbert, James P. Jackson, Tracy Jean, and Simoe Shane.

Executive Director, Timothy A. Barber, paid homage to the Black Archives Historic Lyric Theater Founder, Dr. Dorothy Jenkins Fields for having the vision to preserve the history of Black South Floridians. Before leaving the stage he invited guests to visit the exhibition, Visions of Our 44th President Barack Obama, which closes on February 28th as well as invited guests to come to the next Lyric Live on April 7.