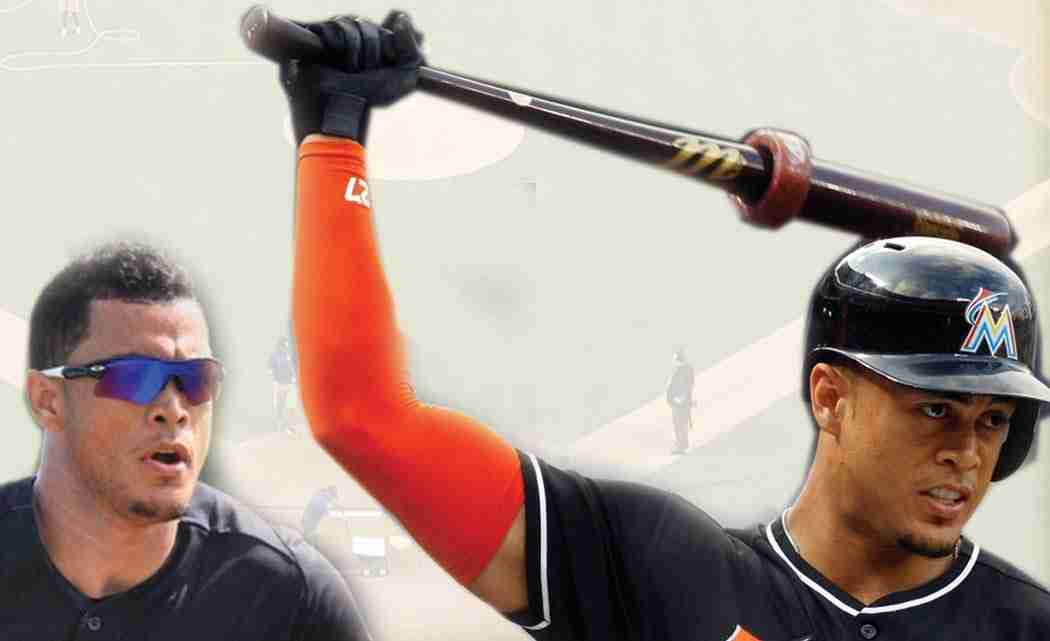 MIAMI — While walking from the parking area to the Miami Marlins front office at Roger Dean Stadium in Jupiter the last day of spring training, Wednesday, April 1, to meet with powerhouse hitter Giancarlo Stanton and president of baseball operations Mike Hill, a gentleman stopped me and said, “Do you know how much Stanton will make every time he goes up to the plate?” “No,” I replied. “$30,000,” he said. We both sort of chuckled and although I hadn’t done the math, Stanton’s staggering, history making $325 million 13-year contract extension  he signed recently suggested to me that perhaps this number wasn’t too far from the truth. The notoriously low player payrolls of the past may just become a thing of the past if recent efforts to recruit and retain players can turn this ball club around. The Fish have been a little bit more liberal these days in what appears to be an attempt to lock down talented young guys and maybe a third MLB World Series championship, but for now, many fans would be happy with a playoff berth.

Hill said the Marlins actively seek a championship each year. It’s the ultimate goal, he said. “We always set lofty goals for ourselves,” Hill said. “We don’t speak in terms of making the playoffs. We speak in terms of winning a championship.”
The Marlins, formally the Florida Marlins, won the World Series in 1997 and 2003, as a wildcard in both instances but haven’t seen any post-season play since.
The season opener was Monday, April 6 against the Atlanta Braves at Marlins Park in Miami. The Braves came out on top 2 – 1. Marlins manager Mike Redmond reportedly wants to rebuild the team, win more games and get back into the playoffs. “Our whole off-season is geared towards winning a championship,” Hill said. “And we’ve tried to bring in as much talent to couple with our existing talent to give us the best opportunity to do that.”
Stanton, 25, is one of the most talented players on the team and certainly the face of the Miami Marlins. The young slugger made history after signing a $325 million contract extension after winning several awards last year, including the 2014 Hank Aaron award, and being a contender for the National League’s most valuable player. It’s the most lucrative deal for an American athlete and averages $25 million per season, or $154,321 per game, according to the website, www.espn.go.com.
Stanton, known for his strong work ethic, said that he will lead the team this year by example. “The way I go about my business, the way I help the younger guys with the (various) aspects of the game, I will lead by example,” he said. “The mental part, the preparation, (working with) the individual, the overall ordeal…”
The every day grind of the game can get to a player sometimes, Stanton said. “If it’s not physical, it’s the mental part,” he said. “Trying to keep the same routine, the same mindset every single day is probably the most difficult part.”
Last September, Stanton was hit in the face with a 90 mph fastball pitch which damaged some of his teeth and caused several fractures and ended the season for the powerhouse hitter, who was a frontrunner for the 2014 National League MVP award. “I was on track last year and that was one of those things you can’t expect to happen,” he said.
For his safety, Hill said that Stanton will be wearing a protective mask this year, with his initial “G” woven into the frame, and Giancarlo is already passed the incident because he has one of the strongest mental games in baseball.
Stanton said a healthy perspective on life, including sports, helps keep him grounded and focused. “Anything I see, negative or positive, I put different things together in my own way,” he said. “Understanding negative situations (is important). Not trying to make them all positive but understanding it. Why was that negative? How can you change it for the next time? More understanding rather than masking things.”

Stanton said his experiences in the majors has enabled him to guide some of the younger players and give them some helpful advice about the every day ins and outs of the game. “If you go a few days without hits your first couple of years in the big leagues and you start panicking, you start thinking about the last couple of days, then that turns into 10 games, and 15 games and 20 games,” he said. “Rather than just moving on and understanding what you have to do that day.”
Baseball is a mental roller coaster that many don’t understand unless you are immersed in it or have played it professionally, Stanton said.
The star outfielder can seem intimidating, a physical force at 6”6’ and 250 lbs. and fans are impressed with his hitting prowess which can land his home runs as far as 484 feet into the stratosphere.
Still, the at-a-glance humble Giancarlo Cruz Michael Stanton says that his most favorite home run is the first one he saw at Dodger Stadium with one of his biggest fans, which led to his love of baseball. He said that he and his dad, Mike Stanton, started watching baseball and going to the games more frequently after that. “We would go to see home runs at the same field,” Giancarlo said. “And now he’s watching me do the same.”

Previous post On the air: An Oasis blooms in Opa-locka