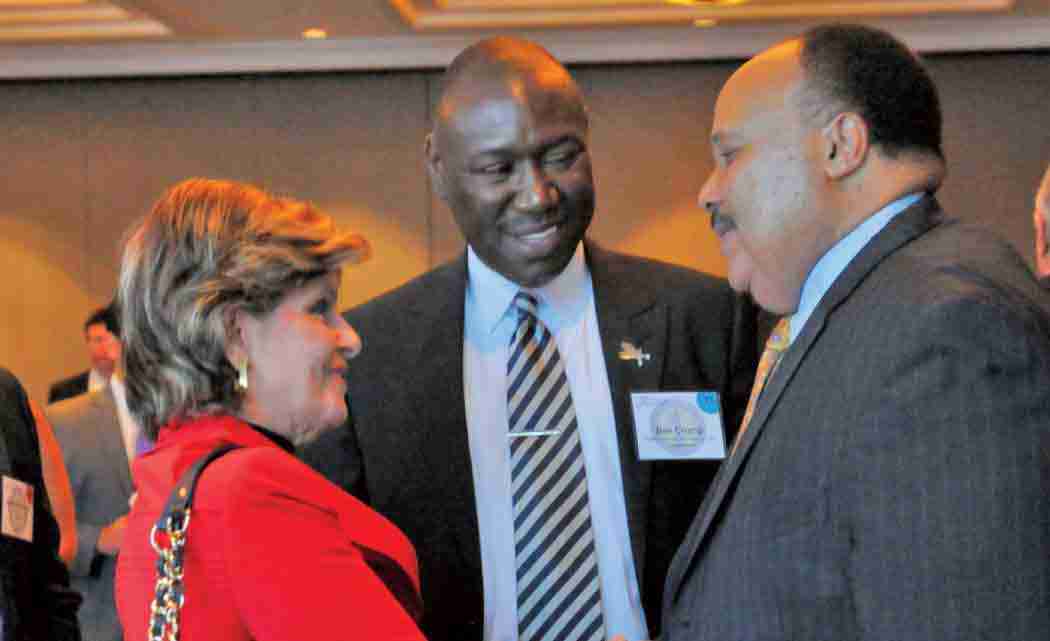 On the holiday established nearly 30 years ago to honor Martin Luther King Jr., the son of the late Civil Rights leader joined a group of panelists at the Miami Beach Loew’s Hotel to discuss the ‘State of Justice in America.’ Joining King on the panel were attorneys Gloria Allred, Mark Geragos and Benjamin Crump, the attorney for the parents of Trayvon Martin.

Also present on the panel was Mark O’Meara, the attorney who represented George Zimmerman, the Florida man acquitted in the shooting death of unarmed teenager Travon Martin. Standing in the rear of the room observing the panel’s session, were Martin’s father, Tracy Martin, and his brother, Javaris Fulton; who were invited guests. The session was a part of the National Trial Lawyers summit occurring this week.

Attorney Hezekiah Sistrunk, National Partner of The Cochran Firm and incoming President of the National Trial Lawyers Association, moderated the session where divergent views on the health of the criminal justice system were shared.

According to O’Meara, the system works as it should. “I don’t think the system is completely broken. I still think it’s the best system that we have and that ever has existed in the world. I truly believe that. We do a good job of attempting to protect the rights that we’re supposed to protect,” he said.

Crump said the system is broken because it fails to hold prosecutors and the police accountable and that there are different standards depending on who is victimized.

“Why do the rules change when there’s a little black or brown boy dead on the street? I think it’s because we try to make exceptions for others,” he said. “For example, when Mike Brown or Eric Garner, we see [Garner being choked] in that video and we automatically say, ‘well what did they do to deserve that?’ We don’t say that when a white person is killed. We say ‘we’re going to get justice.’”

King, who was ten when his father was assassinated in 1968, took exception to O’Meara’s assertions that the system is not broken.

“It should be crystal clear in this nation that the system of justice that we call a criminal justice system is broken, surely for many blacks, and browns and poor whites…when 13 percent of African Americans in the population make up 40, 50, 60 percent of the jail population,” he said. “Richard Pryor used to say that if you go down to the courthouse looking for justice all that you’ll find is ‘just us,’” a reference to black people.

“There is something called profiling. Systematically it’s been structured that way. I call it a criminal system because it’s not justice,” King added.

Providing perhaps the most compelling example of why he said the system is “irretrievably broken” was Geragos, who said the population of California’s prison system is 85 percent “people of color,” by design.

“It is primarily populated by people of color because that is what the criminal justice system is designed to do, process people of color, warehouse them and do it quite effectively. That’s why it’s irretrievably broken,” said Geragos, a criminal defense lawyer whose clients have included Michael Jackson, and Chris Brown.

“In terms of the politics of crime, for years in California it was a state prison mandatory offense for possession of cocaine that disproportionately fell upon the African-American community…until cocaine crossed over and started to get into the white areas,” he shared.

“All of a sudden, [Deukmejian] provided for diversion in DEJ which was deferred entry of judgment, so that we would have a safety valve for when the white kids got busted for what the black kids were going to state prison for.”

Another example of the system’s brokenness was evident during George Zimmerman’s trial, according to Geragos. Because five whites were seated as jurors, he said the outcome of that trial could be predicted with “unnerving accuracy.” He added, “There was no way that there was ever going to be a conviction.”