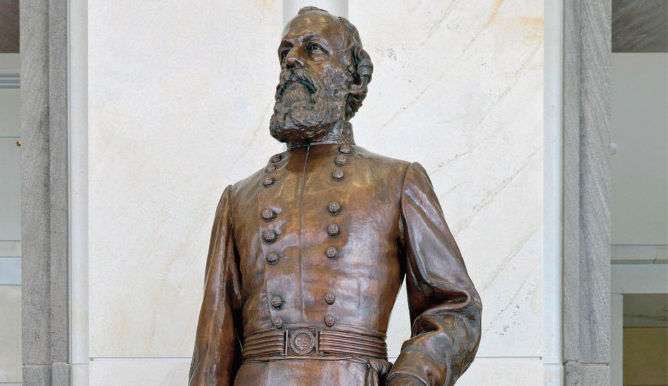 TALLAHASSEE, Fla. (AP) – A proposal to remove a statue of a Confederate leader at the National Statuary Hall is generating speculation among Florida legislators about whose image should replace it.

Legislation to replace the statue of Gen. Edmund Kirby Smith doesn’t         propose a successor. Smith’s place in history is due to his being the last officer to surrender a significant Confederate military force during the Civil War.

Some legislators have suggested Flo-rida should choose a woman, like writer Zora Neale Hurston. Only 10 of the 100 statues in Statuary Hall in Washington, D.C., are of women. Others suggestions include Walt Disney, business tycoon Henry Flagler and former Gov. LeRoy Collins.

Some 10 figures in the National Statuary Hall Collection are of Confederate leaders, or people who fought for the Confederacy during the Civil War. However, the June 17 shootings at a church in South Carolina that left nine African-Americans dead has revived the debate across the nation over whether Confederate images are appropriate.

Opponents say the shooting is being used as reason to erase an important part of American heritage.

“It is another attempt to erase southern history and heritage as if it never existed,” Confederacy buff Seber Newsome III of Yulee told a Senate committee.

Gov. Rick Scott wouldn’t comment on whether he’ll sign the bill, which has passed the Senate and is awaiting a House floor vote.

Each state places statues of two individuals in the National Statuary Hall collection. Florida’s are Smith and 19th century physician John Gorrie, who invented a compressor to help cool yellow fever patients and whose work was critical to the development of modern air conditioning.

Legg, a history teacher, said Smith was chosen in response to a surging white supremacist movement in the 1920s. When he takes students on annual tours of the Capitol, Legg said, he can’t explain the choice.

House sponsor Rep. Ed Narain, D-Tampa, said Smith is “reflective of a past that’s not indicative of who we are as a state.”

Under the bill, the Great Floridians Committee of the Department of State would nominate choices to the Legislature and governor.

Hurston, considered one of the pre-eminent black authors of 20th Century America, grew up in Eatonville near Orlando, then the nation’s first incorporated black city, and fought poverty to get an education. She’s best known for her masterwork, Their Eyes Were Watching God.

Mary McLeod Bethune, whom Legg said several legislators have suggested, was a child of former slaves who grew up in rural poverty but went on to found what would become Bethune-Cookman University in Daytona Beach.