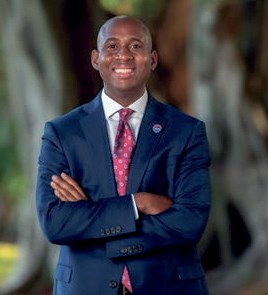 He expressed concern regarding subsequently infection of others, and asked what sanctions would be taken against the former Marjorie Merriweather Post estate that Trump bought in 1985 and turned into a private club.

“When I saw that video, I thought about the staff working at Mar-a-Lago,” wrote Hardy. “I thought about their families. I thought about the teachers who might be teaching the staff’s children when school reopens after Winter Break. I thought about the folks they might encounter at the grocery store or at the pharmacy. I thought also about our healthcare workers who are risking their own lives to treat the sick as this deadly pandemic rages on. It is for them that we should see to it that our mask order is enforced and that potential super-spreader events like this are kept from happening.”

Trump did not attend the New Year’s Eve party, having left early to return to the White House.

“1. Will we take enforcement action against Mar-a-Lago for not complying with the County’s order? We don’t lack evidence of noncompliance. The evidence is all over the internet. Going forward, how can the County enforce its mask mandate if it allows a wellknown businessperson to get away with openly flouting it? “

2. The County published a schedule of ﬁnes for businesses found to be in noncompliance with the County’s order. The schedule provides for a $250 ﬁne for a ﬁrst violation, a $350 ﬁne for a second violation, and a $500 ﬁne for each additional violation. The schedule also says that ‘each incident of a continuing violation shall be deemed a separate additional violation.’ The footage of the party at Mar-a-Lago depicts (conservatively) dozens of instances of violations. If we take enforcement action against the club – which I believe we should – will we seek the maximum ﬁne amounts allowed according to the County’s schedule of ﬁnes?

“3. In our weekly calls, you noted that the County has shut down businesses for continued noncompliance with the mask mandate. Will the County seek to shut down Mar-a-Lago if it ﬁnds that the mask mandate has been consistently flouted there? We must have law and order here in Palm Beach County. What is fair for the average business owner is fair also for the owner of Mar-a Lago.

Newly elected South Florida representative and former Lake Worth Beach City commissioner Hardy’s concern is among other headaches for Trump: Some of the New Yorker’s Town of Palm Beach neighbors say he is not welcome to make Mara-Lago his primary post-White House residence. Their attorney has written the town’s mayor saying that attempting to do so would violate a 1993 agreement that allowed him to convert the former historic estate into a private club.

"I recognize that the President is a powerful person and that his business, Mar-a-Lago is a daunting target for enforcement," Hardy wrote. "But as far as I know, the law still applies to the President and to his business."