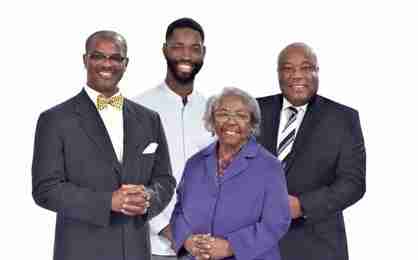 “Through the African-American Achievers awards, we say thank you to unsung heroes for their accomplishments and contributions to South Florida,” said Colin Brown, president and CEO of JM Family. “As we celebrate 25 years of this special program, we are grateful for the dedication of our past and present honorees. Their continued determination and selflessness is an inspiration to our community and the next generation of leaders making a difference.”

In recognition of this year’s Achievers and their efforts to improve the quality of life in our community, JM Family and its subsidiaries Southeast Toyota Distributors and JM Lexus will make a contribution of $10,000 in each Achiever’s name to the South Florida charity(ies) of his or her choice. This year’s contributions will bring the total donation made by JM Family on behalf of its AfricanAmerican Achievers to more than $490,000.

The 2017 honorees were selected by an independent panel of community leaders, including former Achievers from Miami-Dade, Broward and Palm Beach counties. The selection committee reviewed more than 200 nominations received from throughout South Florida after an extensive public outreach campaign.

Arts & Culture: Tarell Alvin McCraney: While McCraney’s most notable accomplishment may be the 2016 Oscar-winning movie “Moonlight,” which was based on his work and life experiences, helping change people’s lives through the performing arts is his natural gift. A graduate of the Yale School of Drama, McCraney is an internationally acclaimed actor, playwright and professor who inspires and mentors youth, especially in his beloved hometown of Liberty City. He finds thoughtful, modern ways to spark his students’ creativity and interests while also identifying areas that are underexposed to the beauty of the theater. McCraney utilizes playwriting and performing arts curriculum at the African Heritage Cultural Arts Center, plus the Youth Artist Leadership Summer Program, an initiative he helped design, to empower young female artists and bring their dreams to life.

Business & Entrepreneurism: Shaun M. Davis: When it comes to starting and growing a business, Davis, founder and managing partner of S. Davis & Associates, P.A., knows what it takes to succeed. Davis’ passion for math as a student, combined with his dream for a successful future, evolved into one of the largest African American owned certified public accounting and consulting firms in the southeast. Davis’ drive and determination have made him an outstanding mentor to minorities interested in starting their own business. He was a former chair and member of the State of Florida Board of Accountancy and most recently, elected as Board Chair for the Urban League of Broward County where he leads the way in breaking the cycle of poverty through programs benefiting thousands of lives each year.

Community Service: Enid Curtis Pinkney: Pinkney is a passionate historian who worked tirelessly for justice and equality by preserving the role of African Americans in Miami’s rich history. Pinkney, dubbed the “Cemetery Lady,” was instrumental in saving the historic Lemon City Cemetery and the Native American burial ground downtown known as Miami Circle. She championed the conservation efforts of several historical sites like the Hampton House Motel, which was one of the few places black entertainers, athletes and celebrities could stay during the days of segregation in the 1960s. Pinkney was elected the first black president of the Dade Heritage Trust organization and is the founder of the African American Committee, which focuses on the contributions of the black community. Pinkney has received many honors and awards for her impressive contributions and, at 85, is still working hard to share her appreciation for history with future generations.

Education: Anthony Lockhart: Lockhart’s talent for transformation was most recently tested when he accepted the monumental task of improving the rating at Belle Glade’s Lake Shore Middle School, which repeatedly ranked among the lowest in Palm Beach County. Through hard work, a heart for education and an inspiring vision as school principal, Lockhart lifted Lake Shore from an F-rating to a C in just one year, making it the most improved in 2016. Building on an impressive record of success, he has a knack for connecting with students and rising above whatever struggles come his way. For his achievements, Lockhart has been recognized with several distinguished awards.