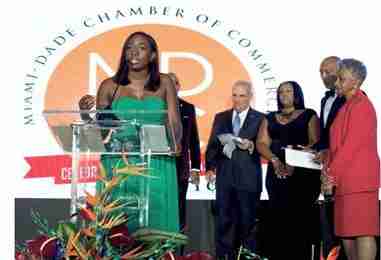 MIAMI – Matthew Joseph, 32, an insurance agent and small business owner, had been thinking of moving from the Miami area because he didn’t think there were opportunities available for black professionals. But that changed after joining the Young Professionals Network (YPN), an initiative of the Miami-Dade Chamber of- Commerce, a few months ago.

“Many times there is a brain drain in South Florida, particularly among people of color,” Joseph said. “We feel that there is nothing here for us. YPN and the Miami- Dade Chamber of Commerce give us hope. It is a visual testament of what can be done if we all work together.”

Joseph was just one of the estimated 700 guests at the Chamber’s 11th annual Holiday Gala on Dec. 3 at Jungle Island in Miami. During the event, business, civic and community leaders were honored for their contributions to South Florida.

“Tonight is a culmination of a year of hard work and advocating for the black business community and also celebrating those that have done so much in our community,” said G. Eric Knowles, President and CEO of the Miami-Dade Chamber of Commerce.

“The chamber is uniquely tied and committed to the community,” Norman Gammon said.

The gala also provided a great opportunity for professionals to network within the black business community.

“The room is full of movers and shakers,” said insurance representative Monthea Young. “Throughout the year, you don’t really get a chance to tie them down but this is a beautiful event to see who is doing what.”

This year marked the first year of the David Fincher Young Innovator Award, which is geared toward young professionals in the business community.

“Young professionals need a place in the gala,” said Ernisha Randolph, CEO of Juanita’s Kitchen Foods and YPN President, who also presented the award to Buchanan, this year’s recipient. “In order to engage the millennials and make them feel more included into the gala, then we need to be represented.”

Next post Tiger Woods is back in the hunt