MIA collects more than $89,000 in fines from person who made bomb threats 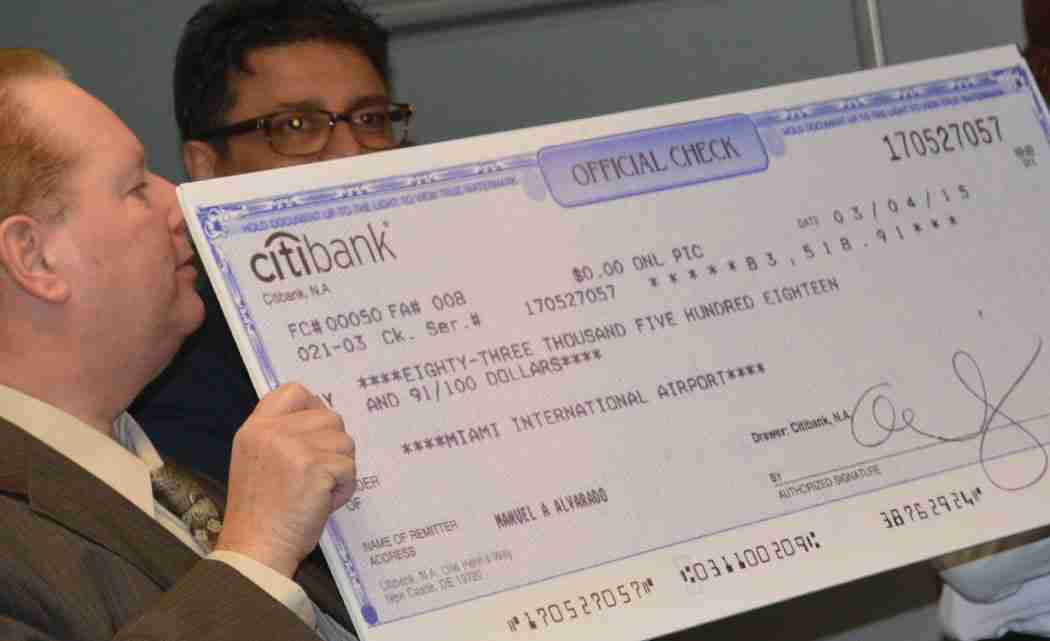 MIAMI — To demonstrate that making a bomb threat in an airport is no laughing matter, Miami International Airport officials yesterday displayed enlarged checks of more than $89,000 from a passenger whose “joke” went awry.

The checks were in the amounts of $83,581 payable to the Miami-Dade Aviation Department (MDAD) and $5,653 for the Miami-Dade Police Department – the result of civil violation fines levied against a passenger who made false bomb threats at MIA last October.

The threats, which the passenger later said were jokes, shut down parts of MIA for hours, delayed flights and disrupted the travel plans of thousands of passengers. This is the first time the airport has pursued restitutions for a false threat, and Miami-Dade Aviation Director Emilio T. González promised that if necessary, it would not be the last.

“Reckless comments like the ones made by this individual last October cost the airport, our airlines and our passengers a countless number of hours and dollars in expenses and manpower,” said Director González. “We are sending a message that we have zero tolerance for this kind of disruption and that if you try something like this, we will pursue criminal and even civil penalties to the fullest extent possible. Congratulations and thanks to our airport staff and security and public safety partners who brought about a successful conclusion to this incident.”

The Aviation Department calculates that a delayed flight costs the airport and airlines an estimated $106 per minute. The announcement of the payments was made last week at the airport’s monthly security consortium meeting, which gathers the airport’s law enforcement and security personnel together to discuss MIA’s security operations.

Previous post What to do if phones fill up with photos