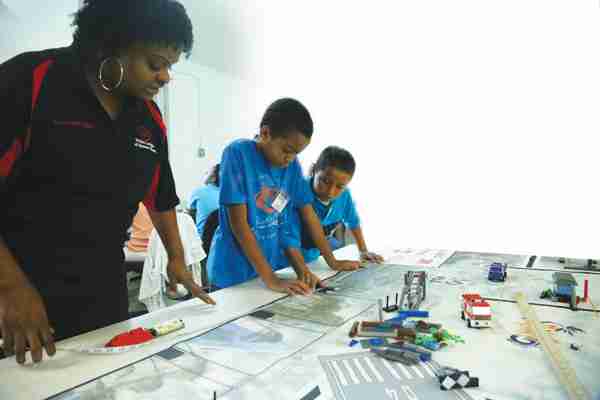 MIAMI — They were a skeptical bunch at first, apprehensive about what would happen to their summer vacation.

But for the 20 students at the Achievement Matters Robotics Camp, skepticism soon changed to excitement.

It was not just simply play. According to Robert Henley Jr., lead teacher at the camp, who served as robotics science, technology, engineering and math (STEM) instructor, the students were doing work comparable to that of contestants in the Department of Defense’s DARPA (Defense Advanced Research Projects Agency) annual competition in Southern California.

The DARPA Challenge draws teams from prestigious universities such as MIT, Morgan State University and Stanford.

The camp, funded by Fisher Island Philanthropic Fund, United Way of Miami-Dade County and the Urban League of Greater Miami Inc. took place July14-18, with an end-of-training competition on Friday.

The camp “dispelled a lot of myths” by showing that the socio-economic status of home or community does not preclude people from being able to create and develop technology, said T. Willard Fair, the league’s long-time president and CEO.

For Fair, the camp was a no-brainer, fitting well into the league’s longstanding “focus on education.” The important point was that the children of Greater Miami are prepared for technology jobs and success, he said.

One way of doing so, Henley said, is to deviate from the traditional “one-wrong-answer-and-you’re-done” approach. “The real world doesn’t work that way,” he said.

The if-at-first-you-don’t-succeed-try-again mindset of the camp was at times “tedious and frustrating,” said Clinton Harris, of Miami Lakes Tech, who was glad he came.

Clinton, who is studying business, realized he can incorporate what he has learned into future entrepreneurial projects. The payoff from the camp was a wonderful sense of accomplishment.

Lyric Dixon, his classmate and trainee teammate, who is studying drama, also expected the camp to be “boring” and was pleasantly surprised that it turned out to be “exciting.”

“I really thought it was going to be just sitting down and listening,” Julian Cardenas, who just finished the fifth grade at Liberty City Elementary, said on the eve of the robot competition.

Instead, he discovered. “We had five days to learn what usually takes six months to learn.”

In that time, Clinton, Julian and Lyric and the other campers would learn to use data such as wheel circumference to calculate how to program a robot to move the exact distance and specific direction that its programmers dictate. They also learned the basics of engineering and how to use ultrasonic sensors.

He was especially pleased to see girls were also programming the robots.

Even before the week ended, students and adults alike were already looking forward to another camp and there is already a waiting list.

Bridget Washington-McKinney, principal of Allapattah Middle School, sent six of her best students to the camp but that was because she couldn’t send more. “I wanted to send at least 50,” she said.

In the competition that ended the camp, Coldsmirley LeLeon of Miami Jackson and Starreak Moncrieffe of Miami Central comprising Team Unstoppable placed first overall and received iPads for prizes. They also took top place in Core Value, Individual Category, and in Robot Design and second place in Programming.