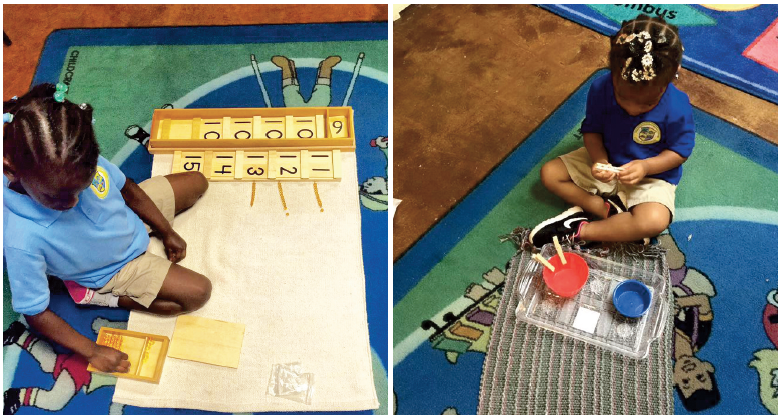 A child’s introduction to education has long term benefits; and in many cases, consequences. Samiya Spencer’s experience as a seventh and ninth grade teacher revealed to her the significance of early childhood education. The birth of her first child sent her in search of an alternative to traditional education.

“When I had my daughter, I wanted something different for her,” Spencer shared. “After “stumbling across Montessori, I visited a couple of schools and absolutely fell in love with it, the teaching methodology of it.”

From there, she became trained in the philosophy created by Dr. Maria Montessori (1870-1952), an Italian physician and anthropologist who devoted her life to understanding how children develop socially, intellectually, physically, and spiritually. Montessori discovered universal patterns of development which are found in all children.

Spencer, her husband, Roderick, and two other investors opened Miami Gardens (MG) Montessori at 18690 NW 2 Ave. last April and currently have 60 students enrolled. A former paralegal who knew the legal profession was not for her after spending two semesters in law school, Spencer’s passion for Montessori is palpable. She’s excited about exposing young students to the method and she wants to educate the black community about why it’s ideal for their children.

The 33-year old wife and mother is pleased with the progress of her MG Montessori students, 90 percent of whom had never attended pre-school prior to enrolling.

“We’re not where we want to be, but the amount of progress that the students have gained in the short amount of time…they’re adding and a couple of the students are moving up to multiplication,” she said of some four-year olds.

Her two daughters, Morgan, 3 and Taylor 5, attend Montessori programs; her younger daughter at MG Montessori. “They will always be in a Montessori school,”

Spencer said. Her experience as a teacher in a public charter school is one reason that she’s so sold on Montessori.

“So many kids…came into my class at 9th and 7th grade with educational gaps. The preschools did not prepare them,” she explained. “We’re about exposing our kids to outside of the box.”

In a Montessori program, children progress in “curriculum that allows you to advance freely, independently,” Spencer explained. “You’re not held back, as much as you can learn, you’re exposed to that.”

Education is a family tradition. “My father taught for 40 years in public school before he passed away and my mother taught for 39 years. My sisters taught,” she shared. “It probably was kind of inevitable,” for her to end up in education.

To help the Miami Gardens community learn more about Montessori, Spencer said, “We’re going to have our first parent town hall meeting on Jan. 11. I don’t think they fully understand Montessori,” she said. “They heard about it and understand that it’s a good curriculum. “We’re going into the history and background and how our kids are progressing.