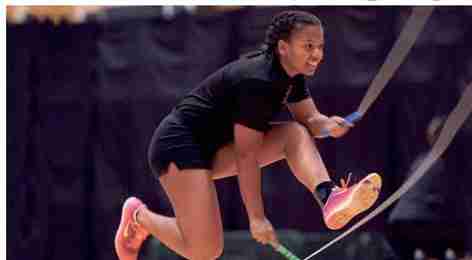 MIAMI – Jumping rope is known as a wonderful cardiovascular activity and variations like “Double Dutch” add a fun component to the exercise. What many may not realize is that jumping rope is also a highly competitive sport and Namiya Crespo, a Miami resident, is one of 15 athletes from multiple states on the United States National Jump Rope Team.

This summer she com- peted in Malmö, Sweden at the FISA World Rope Skipping Championships. Crespo, a member of the “Supersonics” Jump rope team under the direction of the national coach Dillon Bethell, graduated from Palmetto Senior High School in May. She will be attending Emmanuel College in Boston this fall.

“Going to Sweden and competing for Team USA during an Olympic Summer with my team mates was a great experience and I am proud to have brought home a medal, said Namiya.

Namiya started in the Supersonics Jump Rope club in fifth grade when she was ten-years old. Her first competition was at the Junior Olympics in 2009 in Iowa. In 2016, she competed in the FISAV-IRSF World Rope Skipping Championships for Team USA and placed second in single rope speed relay with three other girls. Namiya will be honing her skills as an USA Jump Rope All Star Member and looks to co-facilitate jump rope workshops around the country promoting health and wellness with kids.