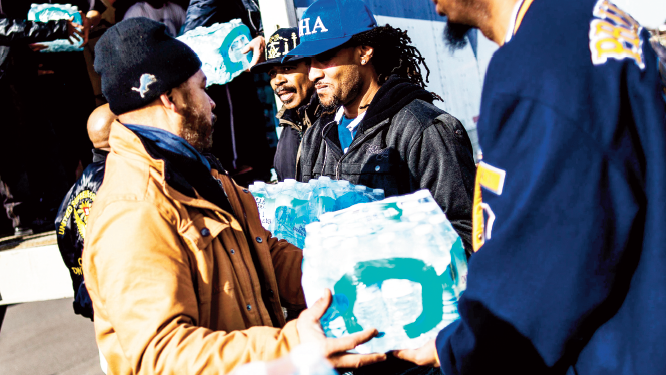 FLINT, Mich. – The Michigan Department of Environmental Quality has undertaken a five-part strategy to determine whether Flint’s water, which has become contaminated with lead, is safe to drink.

Flint switched its water source from Detroit’s water system to the Flint River in 2014 to save money while under state financial management. The river water was not treated properly and lead from pipes leaked into Flint homes. The city returned to Detroit’s system in October while it awaits the completion of a separate pipeline to Lake Huron this summer.

DEQ Interim Director Keith Creagh told the Detroit Free Press he hopes “to be able to say something about the general health of the system come mid-April.” Officials with the DEQ and U.S. Environmental Protection Agency, which have been meeting daily, planned to meet again Monday afternoon.

State officials say water samples from roughly 5,000 homes have been tested, and about 94 percent have are below the “actionable level” of 15 parts per billion for lead. Still, Michigan Gov. Rick Snyder urged all residents to submit a free water test kit, which can be picked up and returned to designated Flint fire stations.

The DEQ said it is working with the state Department of Health and Human Services to make sure residents with high blood-lead levels get their water tested. Those homes are provided additional services in an effort to minimize lead exposure, the state said.

“We want to ensure that all homes are getting the proper immediate attention and the home water tests will help in that process,” Snyder said late Sunday in a statement.

Flint residents coping with lead contamination will be cleared to drink unfiltered water again only when outside experts determine it is safe. Those who are evaluating the water and will help verify its quality include Marc Edwards, a Virginia Tech researcher who helped expose the lead problem and is providing independent guidance to the city and state.

Snyder has accepted responsibility for the emergency while also blaming state and federal environmental regulators. Some have resigned, including the DEQ’s former top official, or have been suspended.

In a letter to more than 46,000 state employees Friday, Snyder said “what happened in Flint can never be allowed to happen again anywhere in our state.” He said he wants a culture where workers’ “input is valued.” He also thanked workers for volunteering in Flint in recent weeks.

Ray Holman, legislative liaison for the United Auto Workers Local 6000, the biggest state employee union, called Snyder’s letter a “little disingenuous,” saying workers often are dissuaded from “thinking outside the box” and speaking up, and have been disciplined for not closely following policy.