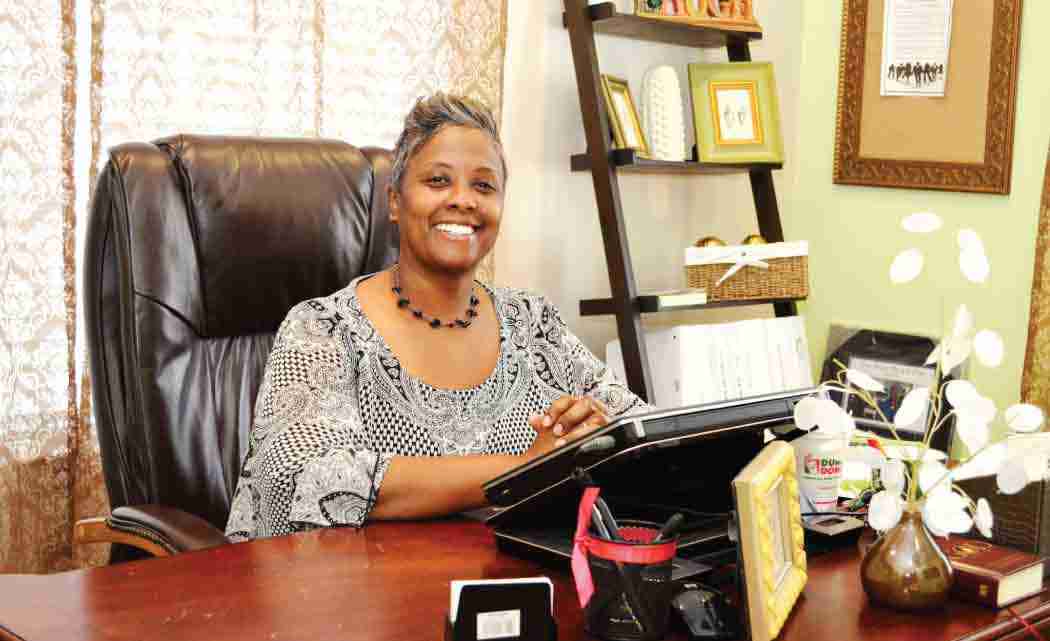 PALM BEACH GARDENS — When Theresa Peak joined the staff of Place of Hope 10 years ago, she had no idea she was about to become a mother to many.

But over the course of a decade, Peak, 45, has grown with the foster care organization, developing her education and skills, just as she has helped hundreds of young people develop their ability to cope with life’s challenges. Place of Hope Executive Director Charles Bender recently presented Peak with a Decade of Dedication-Guardian of Hope award for her dedication to the county’s largest foster care and child welfare nonprofit, and summed up her contribution this way:

“Theresa represents the type of parent that each of these children and young people deserve. She counsels them with honesty, maturity and love,” he said. “She has been a dependable force in their lives, encouraging, guiding and listening to them in way that makes them smile – and that is the heart of our mission.”

Peak is an on-site Residential Manager for Villages of Hope (VOH), a Place of Hope program that helps young people who age out of foster care transition successfully into adulthood on a campus-like setting in Lake Park. But in 2004, she started as a relief parent, working two days a week and one weekend a month in the foster care homes of Place of Hope Palm Beach Gardens’ gated neighborhood. She took the position on the

recommendation of a friend and saw it as an opportunity to impact young lives. At the time, she was a senior Central Control Officer for the Palm Beach Juvenile Detention Center, where she felt like she was reaching them too late.

“Place of Hope was still somewhat new, and I was going into the homes and seeing the challenges the foster parents were having with the kids. We were giving them the love and attention they needed to keep from going the wrong route,” Peak said. “The atmosphere was loving. I started off in the Brett Harris Weinstein Family Cottage, working with boys and girls. By the time I left, I had worked in all of the cottages, as well as the (Seven Stars’) shelter (for emergency services for boys).”

In 2007, Place of Hope received an opportunity to continue its work with the children who left the state system at 18 years old. Bender was approached by several supporters who were interested in finding apartments, which could be turned into housing for emancipated youth. At the time, only four organizations worked with kids who aged out and needed support with education, jobs and life skills. Bender created a position for Peak to help youth who would become clients of Villages of Hope.

“Tori was our first VOH kid. His sister, Cierra, had transitioned out of Place of Hope into a campus for emancipated youth, which turned out to be an expensive move,” Peak said. “Charles knew at that point that we wanted to offer similar services. When I took on the manager position, I became whatever these kids needed for me to be.”

Mother, aunt, counselor, driver, paperwork administrator, job locator, personal reference, nurse and friend – Peak covered the gamut of roles and continues to do so on Village of Hope’s fully realized campus of eight apartments, two cottages for extended foster care, JoAnn’s Cottage maternity home and administration building. Currently, only Villages of Hope and Vita Nova serve emancipated youth for all of Palm Beach County, Peak said. In 2014, Villages of Hope gave 86 young people a place to live, while they worked toward successful independence.

Peak also grew with the organization, earning her Bachelor’s degree in Organizational Management in 2014. She just began work on her Master’s degree in counseling from Jacksonville Theological Seminary.

“I view what I do here as counseling, talking with them as they try to figure out what’s next,” she said. “Some of them come to us homeless, but others come from households where there is simply no guidance, no instruction. This age is just as important as when they are little.”

Peak points to three success stories from Villages of Hope who let her know that what she does matters greatly. Maculene St. Louis came to VOH at 18 with a determination to leave by 23. Although she arrived needing a job and in debt, she would leave with a full-time job, thanks to a summer program brokered by VOH at the Department of Families and Children, and with a healthy savings account.

Taquioya Hall also arrived at 18, and Peak remembers her as a loner, who rarely smiled. However, during her time at VOH, Bender caught Hall smiling and laughing with Peak, who made it possible for the young woman to trust someone. Hall graduated the program with a license in cosmetology and is a senior cashier at Home Depot.

And lastly, there is Dawn Turner, a young woman who Peak said, “turned around, came back and gave back.” Turner survived homelessness to become a homeowner through Habitat for Humanity. She works for JoAnn’s Cottage as a Family Support Worker and also serves on the Board of Directors for Habitat.

When Peak worked for the Juvenile Detention Center, she remembers trying to help children who were accused of setting fire to a warehouse. The children were so young that the center had no clothes small enough to fit them. It was those memories that spurred her to step in wherever she could to turn the tide for other young people without caring caretakers.

“What I’ve learned is that you have to have patience,” Peak said, laughing. “And that the bond between me and these kids is really real.”