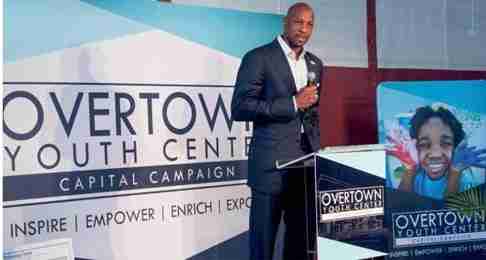 “Our world is changing and so are our communities; thereby creating new challenges as well as greater responsibilities, so my work is far from over,” Mourning said.

During a press conference, Mourning said money raised from the $10 million initiative will be used to demolish and rebuild the Overtown Youth Center into a state of the art facility servicing not just the Overtown community, but also other disadvantaged communities like Little Havana, Little Haiti, Wynwood, Allapattah and others.

Mourning and the OYC staff are grateful for the donations, particularly because it has received a majority of private funds, giving them more flexibility to institute changes at their own pace without having to abide by governmental restrictions that could delay the rebuilding process.

Brown said she is excited to have the opportunity to make even greater community impact by helping a larger amount of youth and families overcome socioeconomic challenges.

“As we approach 15 years of service to our community, I have had the distinct pleasure of playing an integral role and watching our program grow in ways I could not have ever imagined,” Brown said. “At the same time, I have watched the need grow in such a way that we could not ignore it … Growing our efforts through this Capital Campaign is exciting; however, expanding our efforts to create systemic change in hopes of breaking the cycle of poverty in a community that I love is even more exciting.”

The Mournings are known for decades of service to the South Florida community. The basketball great reflected on his reasoning for founding OYC.

“Playing basketball just a few blocks away from the most impoverished community in all of Miami-Dade County, I realized that I could make an impact and so we have to set out on this journey to do just that,“ Mourning said.

OYC’s current facility can reasonably accommodate approximately 300 youth; however, through key partnerships with Miami-Dade County Public Schools and the City of Miami, the program serves over 1,000 students and families per year.

The new facility will boast a state-of-the-art four-story design that will include renovations of its fine arts building and gymnasium. This reconstruction will allow OYC to serve as a communitybased economic empowerment center providing a holistic approach to eliminating barriers to success for children, families and the community at large.

The center plans to expand programmatic services to over 5,000 youth and families over the next five years throughout economically disadvantaged communities.

The Mournings, Diggs, Brown and their staff have shown a commitment to altering the trajectory of inner-city youth and are pleading for the support of others to make an even greater difference.

To give to the Mourning Family Foundation’s Capital Campaign, log onto www.mourningfamilyfoundation.org or text EDUCATION to 27722.