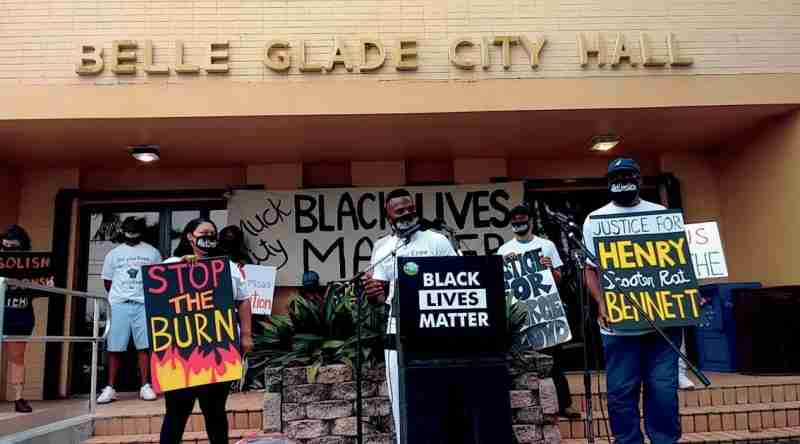 They also asked community members to bring their hearts and souls to the ﬁght.

The Cry of Black Youth (COBY) organization began a battle for Black lives from 1969 to 1971.

Now others say the time is right and ripe for Muck City BLM in the Glades; that the Biden-Harris presidential election victory Saturday is juxtaposed with the power of the Black vote, and demand for change in the Glades, as a reflection of the wider national movement for Black lives.

"I stand before you as your brother, neighbor, and friend,” said Robert Mitchell, community organizer, “to send the message of ‘Get Your Knee off our Necks, and Let Us Breathe!’ I need you to know my people that our Black

Lives Matter! That our Black and Brown Communities Matter!"

Mitchell’s was among a number of voices heard Saturday. Colin Walkes, former mayor of Pahokee, was included:

"Muck City we need to stand up,” Walkes said. “We have to be responsible for our vote. What does that mean? It means getting involved in our community. That means we attend local commission meetings. We need to organize in our community. We need to hold our voices together and hold those we elected accountable to create policies that support us. We cannot keep doing the same dance Muck City."

For too long, added Kina Phillips, “Apostle” community organizer, “we’ve been silent. Whispering. Sitting in the comfort of our homes (complaining) about the effects of a very outdated practice, and still we struggle to breathe. The sugar industry has banked on our silence and has taken advantage of it. How long will we allow them to rape us of the value of our lives, to put a death sentence on our loved ones? It is time to let your voice be heard to help bring about a change. It is time to stop the burn," Phillips said.

Eric Brandon-Oce, community organizer with Food Not Bombs, added: “We are here to put the call out that Muck City BLM is on the map. We know how to build the power that forces change and accountability on the PBSO, Geo Group, and the sugar industry whose single-minded pursuit of proﬁt have turned the blessing of black soil into a health-sapping and life-shortening curse. It is necessary to look beyond our own communities and towards others nearby and far away for solidarity and support. So this is why I am here today. In Solidarity.”

(According to Wikipedia, the Geo Group, an international company headquartered in Boca Raton, manages and/or owns private prison, detention and other facilities in Australia, South Africa, the United Kingdom and North America, including in the Glades. Agencies of the federal government of the United States reportedly generated more than 53% of the company’s revenues in 2019. The company has been the subject of myriad lawsuits by prisoners and families of prisoners alleging poor treatment and mismanagement, as well as related federal investigations of corruption such as kickback and bribery schemes.)

Mitchell closed the event with a call for Muck City residents to sign up and join the movement. Supporters can connect to Muck City BLM on Facebook and Twitter @BLMMuckCity.