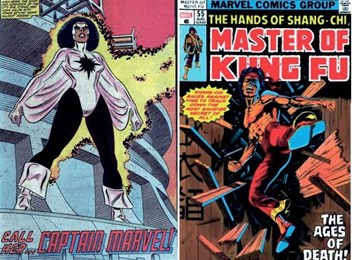 PHOTOS COURTESY OF SPADY MUSEUM COME WITH YOUR CAPES ON

Delray Beach, Fla. – Thanks to the global marketing power of Disney, the world is well-acquainted with T’Challa of Wakanda, also known as Black Panther, depicted in the blockbuster 2018 movie by actor Chadwick Boseman.

However, what is known about Voodha or Lobo? Long before Stan Lee introduced Black Panther to his Marvel Universe, other comic book superheroes of color defended legions and fought off evildoers.

The Spady Cultural Heritage Museum is exploring the influence of multi-cultural comic book superheroes through its latest exhibit, “Eroica: compared to the rest of the world,” opening Thursday, Sept. 15.

Funded in part by a $20,000 Art Works grant from the National Endowment of the Arts, “Eroica” will run through Feb. 29, 2020, and will include several community events that will invite genre fans to have fun with the show.

The ofﬁcial exhibit opening and reception will be held on Sept. 15 from 6-8 p.m. at the museum, 170 NW 5th Ave., Delray Beach. Light refreshments will be served.

The museum also plans to have an interactive, community event on Thursday, Oct. 31, 2019, in which guests of all ages will be invited to come as their favorite superhero.

In addition, during Black History Month, a movie series, showcasing ﬁlms featuring multi-ethnic super hero characters, will be screened at the Spady Museum on Feb. 20 and 21, and a festival is being planned for February 22. More details to come.

Eroica, the exhibit, will include examples of early comics that reveal the origins of super heroes of color, such as Voodha, the ﬁrst Black hero to appear in comic books, Crown Comics # 3 (1945).

Voodha was created by artist Matt Baker, who was also one of the ﬁrst and most successful black comic book artists in industry’s Golden Age period.

The exhibit also will re-introduce Lobo (1965), a western style black hero, created by Dell Comics, whose presence during the period of the Civil Rights Movement caused the publisher to cease its title after only two issues.

Eroica, which also means “heroic,” is a project curated by Khaulah Naima Nuruddin and william cordova (sic) that focuses on the representation of super heroes of color in different comic book publications since their origins in the late 1930s.

“Eroica will be an opportunity to engage people in conversations and reflections that deal with pop culture, iconic imagery, cultural representation, civil rights, modernism and history – all through the depiction of heroism in comic books,” said Spady Museum Director Charlene Farrington.

Next post Aid efforts tell Bahamians that they are not alone