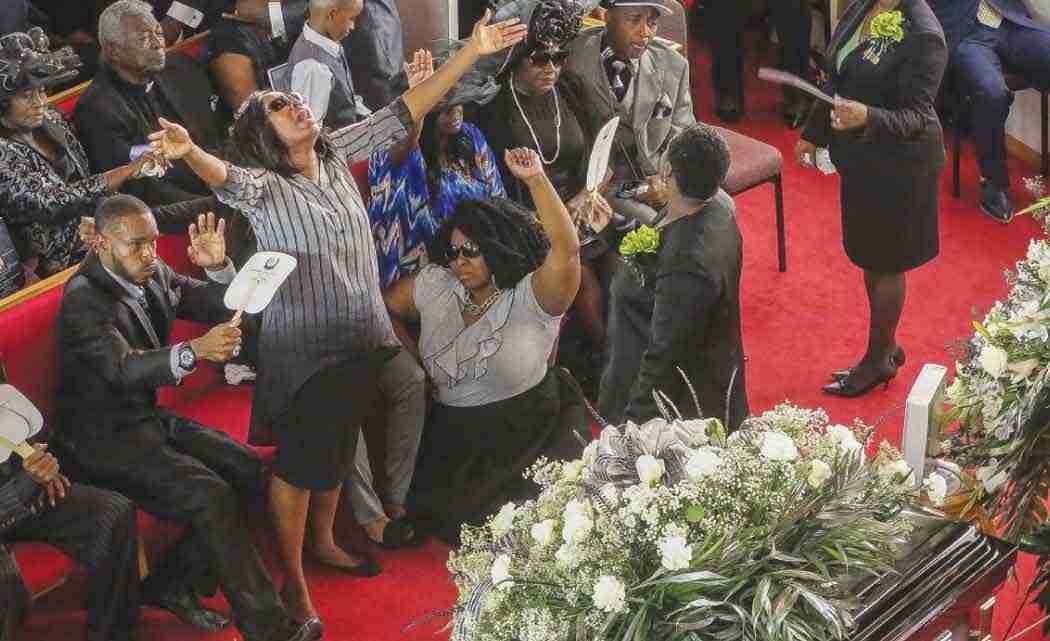 Even in the midst of outbursts of wailing from family members, it was overall a jubilant time as  mourners and nearly 1,000 well-wishers came Saturday to pay their final respects to Corey Jones, the 31-year-old church drummer from Boynton Beach, who was shot and killed by a Palm Beach Gardens police officer on October 18. Scores of people packed every inch of Payne Chapel African Methodist Episcopal Church in West Palm Beach, and hundreds more gathered outside the church. Those left outside were allowed to file in after the family processional in order to view Jones’ body.

He was laid to rest in a shiny black coffin, trimmed in silver, with an embroidered picture of himself and his name underneath, inside the coffin. His name was also inscribed on the outside of the casket in cursive letters. He lay there, wearing a black Oakland Raiders baseball cap and handsomely dressed in a black blazer, emblazoned with the Raiders emblem on it. He wore a shiny white necktie.  His family said he was a huge Raiders fan, so they decided to pay homage to his favorite team. Many family members and friends also wore Raiders caps as a tribute to their fallen loved one. Some of the mourners wore drumsticks around their neck. Corey’s drumsticks were in his casket.

The Reverend Al Sharpton, his body just a mere fraction of the size it once was, showed he is still able to captivate an audience and bring them to their feet with his on-point rhetoric and analysis of the death of black men at the hands of white police officers. Sharpton didn’t disappoint the huge crowd. He didn’t deliver a eulogy for Jones, but instead brought a few words of comfort and some poignancy to the family. Sharpton told the packed church that if neighborhood watchman George Zimmerman was able to use the “Stand Your Ground” law in the shooting death of teenager Trayvon Martin –then Corey Jones had a right to use the controversial law as well. “Officials told me that Zimmerman had the right to shoot a boy because you can “stand your ground” in Florida. He wasn’t in his house. He wasn’t in his car. But he had a right to stand his ground. Well, tell me –what right did Corey have that night?” Sharpton questioned. “Either you can stand your ground, or you can’t! You can’t have it both ways.”

Jones was just the latest in a string of killings involving police officers and blacks, causing outrage amongst African Americans nationwide. Jones was fired at six times by Officer Nouman Raja, 38, who was wearing plain clothes and driving an unmarked car when he approached Jones, whose car had broken down on I-95 near the PGA Boulevard exit in Palm Beach Gardens. Jones had no criminal record. He was legally carrying a concealed weapon and had a permit but never fired his weapon, the state attorney said. Raja struck Jones three times with his gun, killing him.

Jones had been on his way home after a drumming gig with his band, Future Prezidents. He was waiting for a tow truck when the officer approached him. The officer said he approached the car because he thought it was abandoned. He said he and Jones had a “confrontation” and that Jones was armed, and he shot him. Attorneys for Jones said Raja never identified himself as an officer and never showed Jones a badge. His family said Jones had no idea Raja was a police officer. His family also said he carried a weapon because he often transported expensive musical equipment and was often paid in cash for his drumming gigs.

Why didn’t the officer say’I’m the police?’” asked Jones older brother “C.J.” Jones, during the funeral services. “If he had said he was the police, my brother would have laid down on the ground. We are still trying to understand why? Why?” he asked, his voice cracking, as he was flanked by family members at the podium.

While most shared fond memories of Corey Jones, some family members took the opportunity to cry out for justice. “My dream is we’re going to Washington. A bill has to be passed to stop this brutality,” said Jones’ uncle, Steven Banks. “These are real tears. Laws can be changed, but people need to be changed too. Everyone needs to take a stake in this. It could’ve been you. This is not a game,” he shouted.

Apostle Sharon D. Walker of Carriers of the Glory International Ministries of Tallahassee, delivered the eulogy.  Jones’ sister Melissa is a member of her congregation. “Corey didn’t die for nothing. Corey was for God’s Glory. But he is laying here because we’re a nation that’s forgotten God,” said Walker. “Let Corey’s life mean something.”      His   bandmate, Boris Simeonov, said Corey should be in the history books. “It’s my dream that we’ll see his name in the history books and not just in the headlines.” His aunt, Serena Banks, said her nephew’s death will bring about change.  “Corey is going to make change for the United States of America!” she touted.

Others told personal accounts of the man they knew and loved. Jones’ boss, Dorothy Ellington, said Corey was a man who never wanted to take time off from work as an assistant manager at the Delray Beach Housing Authority. He finally took a week off over the summer when he had guests visiting from out of town.

Ricky Bethel, his 2002 Santaluces High School classmate, said Corey’s greatness is hard to put into words: “It’s hard to explain greatness. You have to experience his greatness. This country needed Corey Jones. Corey was born for this reason –to change us.”

Many other family members and friends talked about how special Corey was. But noticeably absent during this entire ordeal has been Jones’ mother. She preceded him in death. Anita Banks Negron died of breast cancer in 2006. Family members said she has called her son to be with her in heaven.

Previous post Black women are abused by police, too