Nehemiah pledges move county closer to IDs for all 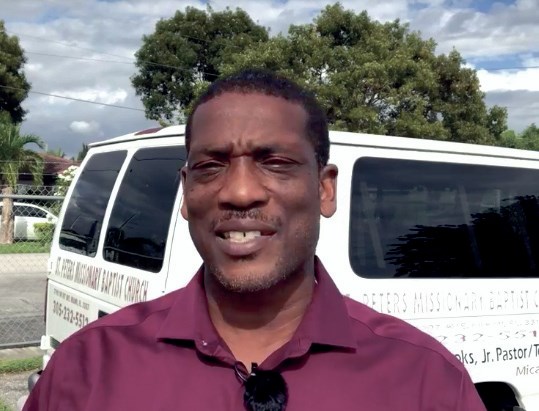 MIAMI, Fla. – Miami-Dade County Mayor Levine-Cava committed to new steps to advance a Community ID program, and passed the legislative baton to Commissioner Danielle Cohen Higgins, who vowed to bring the item to the commission within the next 90 days, as commitments were made in front of 1,200-plus community members on Monday.

The interfaith coalition PACT (People Acting for Community Together) organized the event, their annual Nehemiah Action Assembly, in which they publicly seek commitments on areas of community concern.

Community IDs are considered a local form of identiﬁcation needed to demonstrate identity for municipal services, banks, schools and other county services, including helping vulnerable residents access COVID-19 testing and vaccination. The commitments from Levine-Cava and Higgins came after Soﬁa Morales of Temple Beth Sholom gave testimony describing how her daughter was refused mental health care when Morales lost her passport and could not prove her identity.

“I didn’t matter and by extension my daughter’s life didn’t matter,” Morales said, “what mattered was proving my identity to the system.”

“We’re powerful, we’re angry, and we’re tired,” said Pastor Robert Brooks of the St. Peter’s Missionary Baptist Church in West Perrine. “We did not take out our time to come here to be snubbed.”

The group noted that the state attorney promised in an email to support making several offenses, including driving on a suspended license for non-payment of ﬁnes and fees, petit theft under $300 and others, eligible for a civil citation rather than an arrest, and that they would continue to work with her on the issue.

Miami-Dade Police Assistant Director Stephanie Daniels reported that the MDPD will support some of the civil citations proposed – vandalism under $300, petit theft under $300 and drinking in public – but not driving on a suspended license or with an expired tag, in contrast with the statement from the State Attorney’s Ofﬁce. Organizers said she did commit to strengthen the implementation of Group Violence Initiative, a gun violence intervention strategy in South Dade, on which PACT has worked with the department for years, although a recent spree of 30 shootings, in the ﬁrst 30 days of 2021 in certain South Dade communities, has prompted deep concern among members of the group.

PACT said the event also highlighted the worsening affordable housing crisis, with rental prices soaring in Miami during the coronavirus pandemic, and that Russell committed to push his colleagues for follow-through on the city’s plan to build or preserve 32,000 units by 2030.

Next post Hardy calls for sheriff to vaccinate detainees