Officer fired after fatally shooting man waiting by his SUV 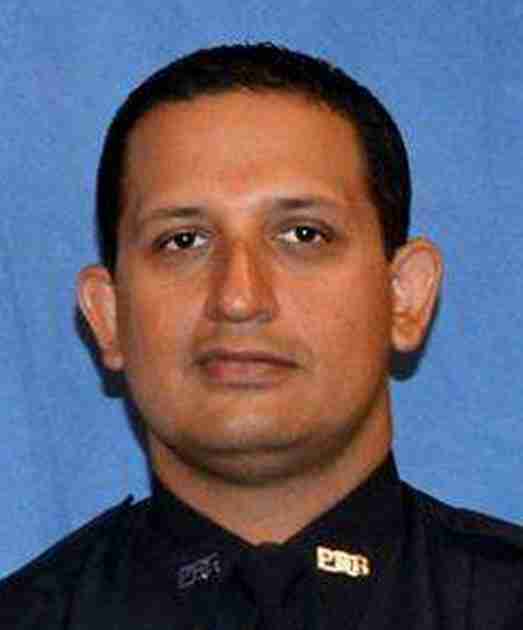 By DAVID FISCHER and FREIDA FRISARO

Palm Beach Gardens –  A South Florida city has fired a police officer who shot and killed an armed man who was waiting for a tow truck next to his disabled SUV last month, officials said Thursday.

Palm Beach Gardens spokeswoman Candice Temple said in a news release that the police department terminated the employment of Officer Nouman Raja on Wednesday. An independent criminal investigation is ongoing, Temple said. The officer was hired in April, and the city said he was still on probation at the time of the shooting.

“The City of Palm Beach Gardens has been cautiously and methodically considering the employment status of Officer Nouman Raja,” Temple said.

Raja was on duty but not in uniform and driving an unmarked van when he approached Corey Jones in the early morning hours of Oct. 18, authorities said. Jones, a musician who performed with local bands, had just left a gig when his vehicle broke down. A fellow band member tried unsuccessfully to jumpstart the SUV, then left Jones to await a tow truck along a dark ramp on Interstate 95 in Palm Beach Gardens, an affluent city north of West Palm Beach.

At the time, Palm Beach Gardens Police Chief Stephen Stepp said Raja had been investigating local burglaries, stopped to check out what he thought was an abandoned vehicle and “was suddenly confronted by an armed subject.”

Palm Beach County Police Benevolent Association President John Kazanjian said he’s disappointed that city officials fired Raja before getting all the facts. The union president said officials wouldn’t have been able to fire a veteran officer without a complete investigation, but with Raja only on the job for about 6 months, his superiors only had to say that he failed to make probation.

“The chief probably had some outside pressure to fire Officer Raja,” Kazanjian said.

“We’re looking at all possible avenues into getting Officer Raja his job back,” Kazanjian said.

Jones’ family and civil rights activists have been demanding answers from police.

Attorneys representing the family released a statement on their behalf Thursday, saying they were pleased with Raja’s firing but also want him to be held criminally liable for the shooting.

“Our family remains hopeful that the outside agencies brought in to investigate Corey’s killing will soon begin to yield factual information about how and why this officer acted so callously,” the family’s statement said.

Jones’ family and lawyers have insisted he would not have had his gun out as Raja approached had he known Raja was an officer.

In the days after the shooting, Palm Beach County State Attorney Dave Aronberg made no comment as to whether Raja identified himself as an officer or showed a badge, two things the family’s attorneys say didn’t happen.

Raja’s van had no dashboard camera, and the department’s officers do not wear body cameras.

Attorneys for Jones’ family include Benjamin Crump, who has represented the family of Travon Martin and other slain African Americans.

The attorneys said Jones had five wounds _ some of them exit wounds_ and one shot broke his arm. Another entered through his side and lodged in his upper body, the lawyers said.