Oh, what a night at the opera 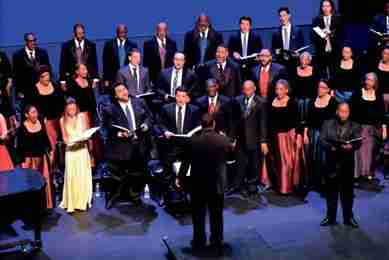 WEST PALM BEACH, Fla. – It was an historic night last week when the Palm

The dynamic duo came together for a first time ever performance as a salute to Black History Month. Fans and curious concert-goers packed the Duncan Theatre on the campus of Palm Beach State College in Lake Worth, February 9, and by all accounts were overjoyed with the performances!

Between the gifted young opera singers and the poignancy of the Ebony Chorale singers, it was a night of stunning selections filled with cries of pain, moments of laughter and sheer delight at the skill of each of the performers. Starting with the moment the combined groups entered the stage, there was a sense of something unique and special in store for the night. And as each number was presented, it was clear that both groups had extraordinary talent that transcended the moment in time.

The Director of Artistic Operations for the Palm Beach Opera, Scott Guzielek, even eluded to today’s racial and cultural climate, saying he sensed the night’s collaboration could even bring about peace, togetherness and healing of a fractured world. “Our world seems more and more fractured these days. But the commonality of music might make the world a better place. I believe this collaboration showcases the best of Palm Beach County,” he said to resounding applause from the audience.

Neil Nelson, the featured bass baritone and the night’s co-narrator with Guzielek said both the opera and the negro spiritual long for freedom and hunger for justice. He kept the audience riveted with his deep, pure voice during both song and narration. His rich baritone voice belted out numbers that had the audience nearly in tears at times, and joyful at other times as he sang songs like “Old Time Religion.”

Though born in Kingston, Jamaica, he moved to the states with his family and grew up in Queens, New York, graduating with a degree in musical performance from the New England Conservatory of Music. It has been said by colleagues and critics alike that he has one of the most pure and resonant voices of all time. His critical acclaim in music has landed him numerous awards and honors.

Additional studies in piano pedagogy and accompanying were taken at Peabody Conservatory of Music and the Oberlin College Conservatory of Music. His signature choir, the Ebony Chorale, is in it’s 25th season and has traveled the world extensively performing in foreign nations and locally.

The Palm Beach Opera’s Beneson Young Artists and Apprentice Artist Program are two parts of the three-tier training system at Palm Beach Opera. During their residencies, the artists develop and polish essential stagecraft and performance skills, aided by musical and career guidance from experienced artistic staff. The young people performed a level of greatness that surely transcended their ages.

Everyone involved said the collaboration, hopefully is just the first of many to come due to the overwhelming success and impact on the community and music as a whole.