OIC of South Florida celebrates years of service with class 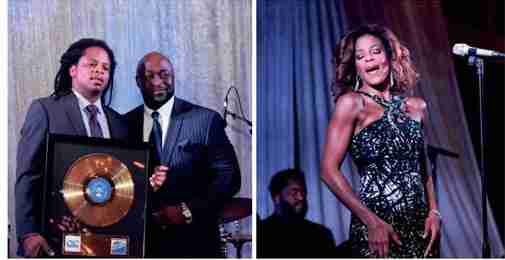 Guests were treated to the musical stylings of world-renowned jazz vocalist Nicole Henry and her quartet, who provided the perfect ambience for the celebratory evening.

Throughout the cocktail hour, guests enjoyed bidding on unique items at the “Notes of Change” Silent Auction while acclaimed saxophonist Jon Saxx entertained.

OIC-SFL is a community-based not-forprofit organization that works consistently with underserved populations in the South Florida community to provide workforce development, education and training that prepares individuals – youth and adults alike – for the world of work.

The occasion was organized to raise funds to aid the organization in furthering its mission and recognize five honorees who have played key roles in the life of OIC-SFL.

Newton Sanon has served as OIC-SFL President and CEO for the past 16 years. He said it’s an honor to help transform lives.

“It has been an honor to serve the community and it brings me great satisfaction to know that we are able to help people change their lives by promoting economic self-sufficiency through education, vocational skills training and jobs, which provides them and their families with greater stability. We help make their circumstances better for them and their families,” Sanon said.

W. George Allen, OIC Board Chair, highlighted OIC-SFL’s journey from three staff to over 90 employees and its growth from an annual budget of $125,000 to over $8 million, which he had a front row seat to witness, having served in his capacity for 13 years.

Washington was able to successfully transition from the criminal justice system and re-enter society to become a productive member. He has been serving as a Critical Care Paramedic at American Ambulance Services for 10 years.

In Maymon’s thank you, he announced American Ambulance’s commitment to further strengthen and expand its decade-long relationship with OIC of South Florida by awarding 30 scholarships to train new Emergency Medical Technicians (EMTs).

Also recognized was Christopher Dorsey, Director of Dillard Center for The Arts Jazz Ensemble, with “The OIC Golden Record Award” for the Preservation of Jazz and Jazz Education; and Daniela Embrack, OIC Youth Alumni, with “The OIC Notes of Change” Youth Leadership Award for her work as a Youth Leader in one of OIC’s cornerstone programs – Project PAUSE.

“The event honored those who paved the way for OIC to be established, celebrated our accomplishments to date and recognize (sic) the collaborative community commitment needed as we forge ahead to expand our capacity to serve more,” said Arlene Connelly, event organizer and Director of Communications & Strategic Partnerships for OIC.

For more information on OIC or to contribute to their efforts in the form of partnerships or donations, visit www.oicsfl.org or call 954-563-3535.