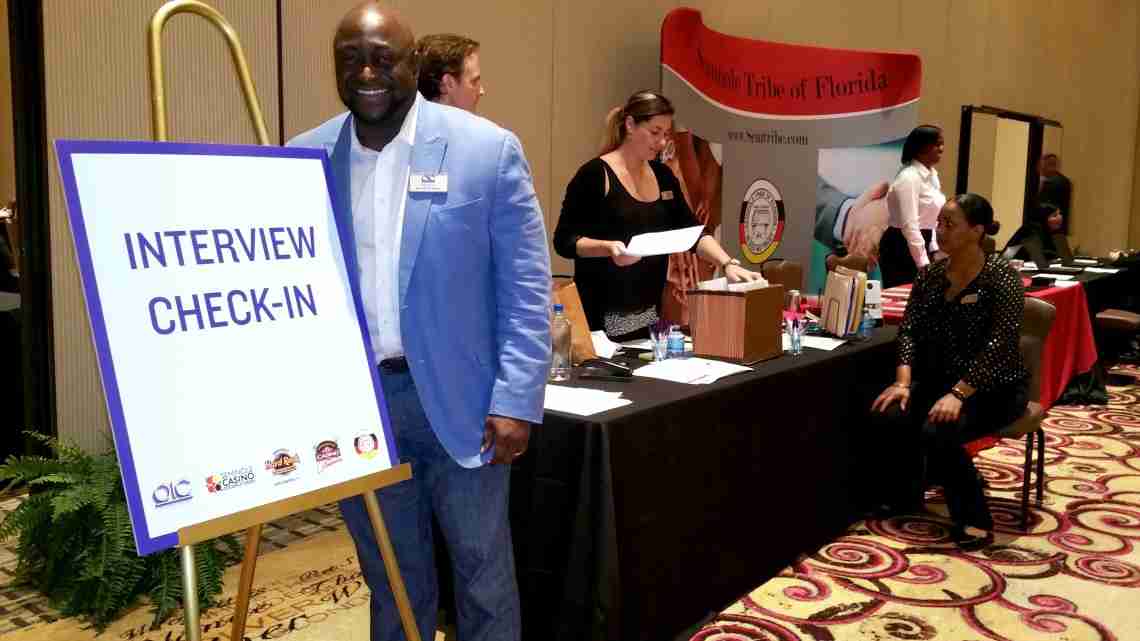 HOLLYWOOD, Fla. – Recently OIC of South Florida (OIC-SFL) and the Seminole Tribe came together to help hundreds of South Floridians on their journey to finding employment. During a job and vendor fair held Feb. 25 at the Seminole Hard Rock Hotel & Casino in Hollywood, 205 candidates for Broward and Dade counties participated in onsite interviews, of which 119 successfully advanced through the interview process.

After weeks of working with Career Source Broward and Career Source South Florida to pre-screen over 400 job seekers for employment opportunities, OIC staff said they were gratified to see the smiles of the 35 who were offered positions on the spot and another 40 who were invited for a second interview for jobs at the Hard Rock Hollywood, Seminole Classic Casino and Seminole Casino Coconut Creek.

According to OIC-SFL, the organization is committed to enhancing people’s quality of life and offering opportunities for self-sufficiency by providing training, access to employment and navigational support tools that can reduce barriers to success.

The two entities went on to collaborate on hosting an event called “The Middle Class Summit” centered around building, elevating and sustaining the middle class.

“Often times you have these events and then there’s not a lot of action, but he (Allen)

committed to hosting with us as a follow-up activity to bring some action to the discussion,” Sanon said.

As one of the largest employers in the State of Florida with over 30,000 employees and approximately 500 jobs available at any given time, the Seminole Tribe of Florida has a major impact on the economy.

At the time of the fair, the Tribe had 700 positions available, allowing OIC-SFL to offer up the first 160. They also gave OICSFL 60 lines of business to procure, offering small businesses the opportunity engage and do business with the tribe. Over 40 small businesses were on site.

“It was a great success. A lot of people were placed on the spot and some small businesses got tentative offers on the spot as well,” Sanon said. “We’re happy about the relationship. They’re ecstatic as well and we hope to be able to continue that relationship for the betterment of South Florida.”

Sanon was also clear about their focus on offering minority businesses procurement opportunities.

“We had a particular interest and focus in minority contractors. That was the prime objective. It’s not the sole, but the prime objective,” Sanon said. “As I walked around on Saturday, 90% at a minimum of vendors were minority-owned and women-owned businesses.”

Attendees received a warm welcome and special greeting from Sanon, Marcellus W. Osceola Jr., Chairman of the Seminole Tribe of Florida, and City of Hollywood Mayor Josh Levy. Representatives from the office of Congressman Alcee L. Hastings were also in attendance.

In addition to offering education on the procurement procedure, the vendor fair also provided exhibition and networking opportunities and informative sessions such as the Broward Is Buying 101 Workshops held by the Broward County Office of Economic and Small Business Development.

With over 50 years of service to the community, OIC-SFL has no intentions of slowing down. They will be launching an expansive Miami campus, hosting their jazz gala in August with Congressman John Lewis as an honoree and launching a few new projects including helping people get industry certifications and childcare at no cost.

“This is my 16th year running the agency and it is a badge of honor for me. Everybody needs a job. Everybody needs an opportunity to be economically self-sufficient and provide for their families and/or be an entrepreneur; so we just feel so great about 50 plus years of being a beacon of hope to making sure people realize their aspirations … It’s an honor and it’s one that we expect to do for another 50 years,” Sanon said.

Sanon also said he couldn’t be happier when organizations like OIC-SFL and the Seminole Tribe can unite to connect people with necessary resources.

“That is the most fulfilling part of my career and events like Saturday’s. The joy of observing people solidify employment, there’s nothing like it,” Sanon said. “A job is about more than income. It’s about pride; it’s about dignity. It’s about self-respect and solidifying a legacy for your children. … The excitement of that fact that people are right at the door of opportunity … That’s a magical thing and it really is the essence of what our organization is about.”

Next post Lions finish as Sun Conference runner up