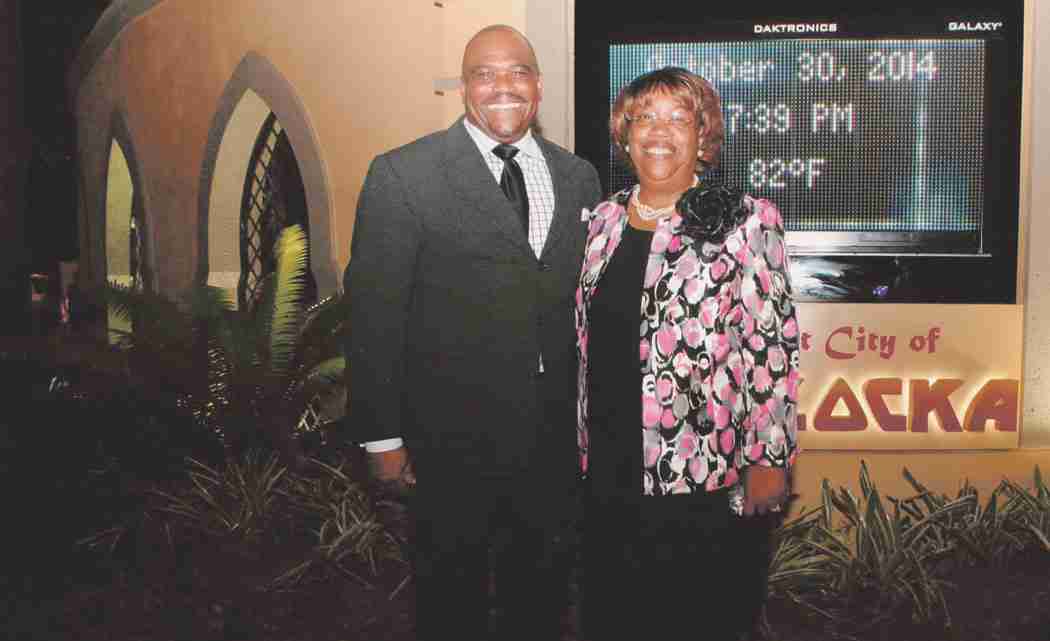 OPA-LOCKA, FL — Motorists going through the heart of this North Miami-Dade city are getting a different type of welcome, as the city recently dedicated a new digital display, which officials say is part of a beautification process in the area.

Accompanying the electronic display are two canal fountains, which together create a gateway roundabout. The dedication comes on the heels of Opa-Locka receiving $500,000 from the state Cultural Affairs Capital Facilities Planning grant to build a multipurpose center near a park on the city’s south side.

“We’re trying to improve the image of the city and hopefully entice new developers,” Chiverton said.

The display was unveiled during a sunset ceremony on Oct. 30 near the intersection of Northwest 27th Avenue and Opa-Locka Boulevard, two major thoroughfares. Along with the display are two lighted fountains in nearby canals.

Officials hope the improvements will attract attention of developers and business owners as a venue for relocation.

“We have open land here that can be used for apartments, affordable rentals,” Chiverton said. “This investment is to show the image of the city. We’re moving into a modern phase.”

The construction took place over a five or six month period. Chiverton said the idea initially was raised by Mayor Myra L. Taylor in a State of the City report, and came before the city commission earlier this year.

The display — an 8 foot by 6 foot LCD monitor — will feature traffic, time and temperature information, as well as official news from the city. Residents and passersby can get information about upcoming commission and board meetings.

“It’ll be an info board directly related about the city,” Chiverton said.

The display already has gotten attention.

“We’ve gotten calls from residents. Some people are excited, some want to know who owns it,” Chiverton said. “Some want to advertise. We’re not going to do that yet.”

The new Gateway project, complete with light display, and oxygenation fountains installed in the nearby canals, is expected to be a huge upgrade and an artistic modification to the surrounding area; one more step towards transforming the City of Opa-Locka.

With Commissioner Timothy Holmes and Luis B. Santiago joining her for this occasion, Mayor Taylor, who has nicknamed the Gateway Roundabout wall “Opa-Linda,” revealed, “I have sponsored legislation to build another one like this, East of 27th Avenue.” She concluded that this is, “Just one of the things … we have a whole list coming in ‘The Great” City of Opa-Locka!”

Chiverton said the new grant, announced Oct. 27, will provide seed money for renovations on the city’s south side, specifically near Segal Park, Northwest 143rd Street and 22nd Avenue. He said Opa-Locka hopes to create a multipurpose center similar to one in Sherbondy Village, 215 Perviz Ave.

A release from the city to announce the award states “In addition the implementation of music, fitness, tutoring, crafts and other activities that are proven to boost energy, [also] controls weight, improves psychological and physical behavior, fights disease, or improves health conditions, and insets a better health and mood to create success in life, society, and learning. The benefits collectively given by a multipurpose generational center will allow the people of Opa-Locka to coagulate and discover a better sense of community. In addition, it will allow the youth a communal place to interact and make productive use of their time, as opposed to doing counterproductive activities.”