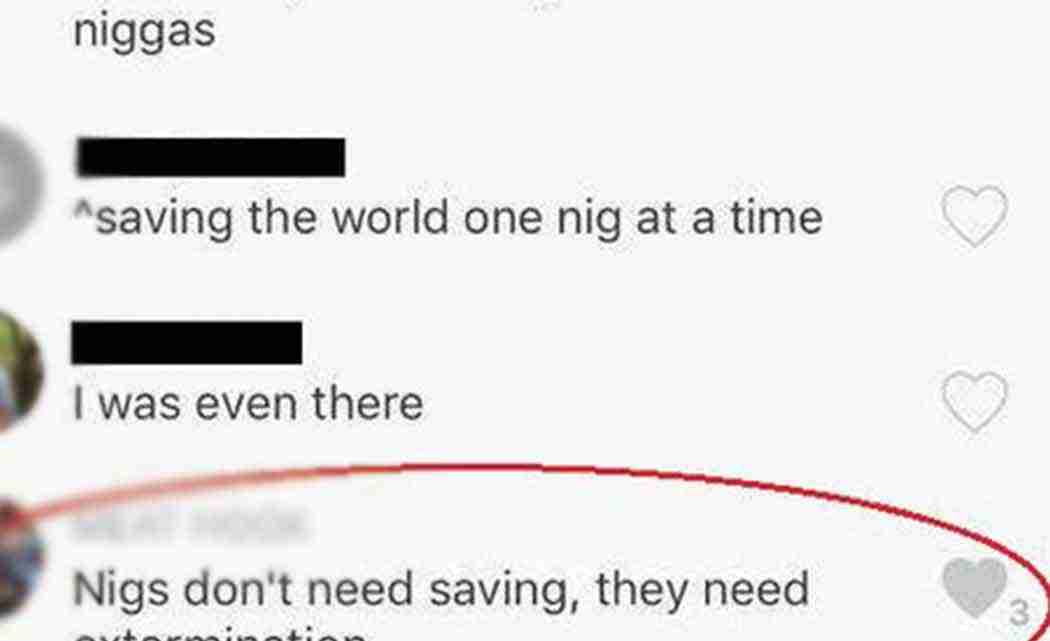 MIAMI — In yet another incidence of racial intolerance that appears to be epidemically surfacing across the nation, white students at Miami Palmetto Senior High school have reportedly been discovered posting derogatory statements regarding blacks on social media.

According to screen shots obtained by the Miami-Dade Branch of the NAACP, the statements range from “it’s a (expletive) safari near the lunch room,” and “sweet tea and chicken bones fly through the air there;” to “senior prank kill all niggers” and “Nigs don’t need saving, they need extermination.”

Reports obtained by the Miami-Dade Branch of the NAACP after its president, Shirley Johnson contacted the school district and Palmetto’s principal, indicated eight students were involved and have been “counseled” regarding their actions. The branch is vowing to further investigate the racial statements and is urging an opportunity for a “transparent discussion with the students.”

The principal, Victoria Dobbs, notified the school’s parents of the incident in a letter posted on the school’s website.

“Yesterday, my office was made aware of a troubling series of social media postings that reference our school, which are uncharacteristic of our school’s venerated history. The posts, which were generated off-campus by a small number of Palmetto students, contain derogatory, racially offensive language that conflicts with School Board policy, including the Code of Student Conduct,” the letter reads. “The students involved in these recent infractions of our District’s policies were immediately identified and have been informed that we are aware of their inappropriate conduct, that such improper conduct will not be tolerated, and that they will be dealt with accordingly.”

Johnson has requested that additional actions be taken regarding the students’ behavior.

“Although we are pleased to hear that the students involved in posting these hateful messages have been disciplined, we continue to be deeply concerned about how the administration addresses these issues moving forward. The branch does not want this despicable act to be “swept under the rug.”’

She also expressed concern regarding the potentially dangerous nature of the posts.

“These comments go far beyond the use of the N-word. Students suggested killing and exterminating blacks, as well as comparing them to monkeys,” Johnson said.

Palmetto can now be added to a growing list of secondary and collegiate institutions where racist behavior towards black students has been discovered.

“The hateful, derogative statements expressed via social media by students at Palmetto Senior High reveals a disturbing trend of hate and racism in this country and at our schools,” Johnson added.

University of Missouri President Tim Wolfe resigned Monday after graduate student Jonathan Butler went on a hunger strike and the school’s football players refused to take the field to protest Wolfe’s failure to take appropriate actions regarding a series of racist actions perpetuated against black students on the campus.

Yale University officials recently convened a forum to address racist allegations at that Ivy League institution, resulting in the university president issuing an apology and acknowledging to minority students, “We failed you.”

Johnson is offering an opportunity to make the incident a “teachable moment.” She said, “I firmly believe that they are more alike than different. They will not know it until we invite all to the table and all invited make a choice to come.”

Vanessa Byers, executive board member of the Miami-Dade NAACP and proprietor of Bloggingblackmiami.com, suggested that the students are merely demonstrating learned behavior.

“Schools are microcosms of our society. When our nation’s first black president is openly disrespected and blacks are subjected to police brutality with alarming frequency, why should we really expect anything different than the conversation of the Palmetto lacrosse players. Children live what they learn.”

Byers is doubtful that the students will face suspension; urging that they at least be required to learn from their actions.

“The school district’s new emphasis on reducing the number of suspensions will likely preclude that as an option for punishment, especially for these students. If suspension is not an option, the young men should be required to do community service and the district should provide them mandatory racial sensitivity training.”

Requests for comments from the school district and principal could not be made due to the district’s closure for the Veterans Day holiday.