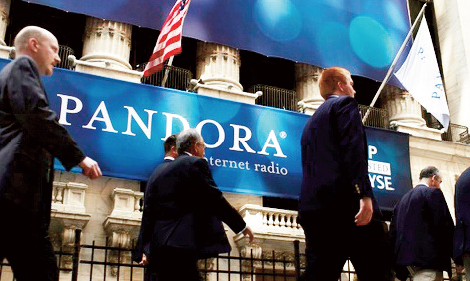 Users are able to listen to music on Pandora for free and the company makes most of its money by selling advertisements. Users can opt to pay $5 a month to listen to music without ads. Pandora said listener hours in the fourth quarter rose three percent to 5.37 billion hours compared to a year ago, but the number of active listeners fell less than a percent to 81.1 million.

The company plans to add a subscription service later this year that lets users have more control over which song they want to hear. With that service, Pandora faces increasing competition for users from Spotify, Apple Music and other streaming services, said BTIG Research analyst Richard Greenfield in a note to clients. It is also competing for the same ad dollars that could go to other tech companies, such as Google, Facebook and SnapChat, Greenfield said.

Late Thursday, the Oakland, California-based company reported a fourth-quarter loss of $19.4 million, or nine cents per share, in contrast to a profit in the same period a year earlier. Earnings, adjusted for one-time gains and costs, were four cents per share, falling short of the average of 7 cents per share that 17 analysts surveyed by Zacks Investment Research expected.

Next post Sitting down front is no longer optional