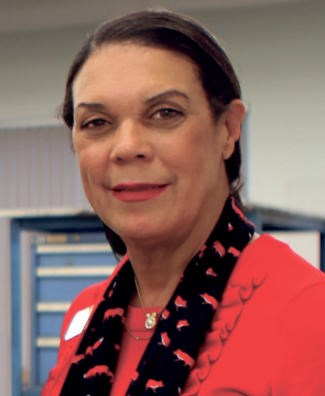 Richie, whom many called Pat or Dean Richie, had worked at the college in various workforce roles for 27 years before retiring in January.

“Pat truly loved working at Palm Beach State College,” her family said in a statement, “and spoke very highly and fondly of both her work family and the countless students she had the pleasure of mentoring and leading at the College.’’

Richie began working at then Palm Beach Community College in 1994 as director of Continuing Studies.

She helped transition 45 career and technical programs, including cosmetology, from the Palm Beach County School District.

Her role widened in 2003 when she was named the ﬁrst dean of workforce development, as the college opened its 150,000square-foot Education and Training Center, which houses many of the roughly 60 programs she oversaw.

Under her leadership, the college became an even more dominant leader in career and workforce training in the county, adding new and expanding programs and partnerships with industry leaders.

During the construction boom of the early 2000s, Richie provided oversight and contract administration for a substantial apprenticeship program for various trades. This was part of the college’s commitment to Palm Beach County economic development.

Her PBSC colleagues expressed sadness and shock over her passing, and lauded the impact she had at the college and in the community.

“She mentored, motivated, educated and left an indelible impact on many people in higher education and in the community,” added Dr. Tunjarnika Coleman-Ferrell, interim vice president of Academic Affairs and the Palm Beach Gardens campus provost. “Her flair for fashion, amazing smile and contagious laughter brought sun into the room. Several people have said that she made everyone feel special.”

“She mentored, motivated, educated and left an indelible impact on many people in higher education and in the community,” added Dr. Tunjarnika Coleman-Ferrell, interim vice president of Academic Affairs and the Palm Beach Gardens campus provost. “Her flair for fashion, amazing smile and contagious laughter brought sun into the room. Several people have said that she made everyone feel special.”

Richie, a native of Baltimore who lived in Wellington for more than 20 years, came to PBSC after working for eight years at Dundalk Community College in Maryland as director of business and contracted services and later director of community services.

She never hesitated to help the college or the community. She participated in Port of Palm Beach initiatives and was instrumental in establishing the Riviera Beach Workforce Development Task Force, an initiative that led PBSC to create an instructional site at the Riviera Beach Public Works Center to offer classes for the Business Specialist College Credit Certiﬁcate.

Richie was involved in community and college-related organizations and committees, including the PBSC Chapter of the National Council on Black American Affairs, the Association of Florida Colleges, PBSC’s Hispanic Serving Institution Committee, the Central Palm Beach County Chamber of Commerce and the Palm Beach North Chamber of Commerce.

She was a past active member of the West Palm Beach Chapter of the National Coalition of 100 Black Women.

“Pat was greatly admired and highly respected for her professional and personal accomplishments,’’ her family said in the statement. “Dean Richie commanded the attention of all she encountered with her unmatched sophistication and classy style. Pat was deeply loved and will truly be missed by her family and friends.”

She is survived by her nephew, David Clark and his wife, Natalie, nephew Michael Clark, and a host of cousins, other relatives and special friends.

Richie will be laid to rest with her loving mother, Mildred Richie and sister Pamela Clark in Ford, Va. A local memorial service will be forthcoming.