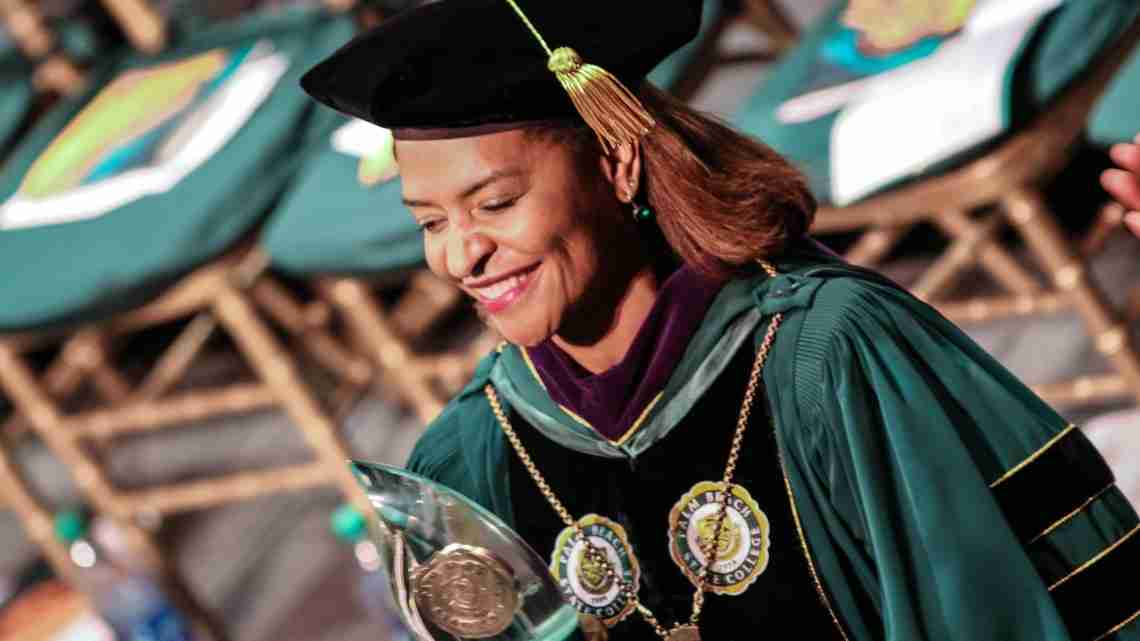 LAKE WORTH, Fla. – During the investiture ceremony officially installing her as Palm Beach State College’s fifth president, Ava L. Parker, J.D., announced a one million dollar gift to the College from a Palm Beach Gardens couple with a passion for education.

Themed “Investing in a New Vision,” the academic ceremony drew more than 500 people to the Duncan Theatre on the Lake Worth campus, including the Florida College System chancellor, college and university presidents, lawmakers and business leaders. It created an ideal backdrop for the announcement of the generosity of Jan Winkler and Hermine Drezner and for Parker’s appeal to others to invest in Palm Beach State.

Parker also announced during her investiture address that the Palm Beach State College Foundation’s Charitable Gift Annuity Program has been renamed in their honor – Winkler/Drezner Charitable Gift Annuity Program. The surprised and teary-eyed married couple of 24 years was presented to the crowd in a two-minute video before they were brought to the stage and presented with flowers.

Winkler said he and his wife, who have lived in Florida since 1997, also started a program in which students are awarded college scholarships in the third and fifth grades. He said they fell in love with Palm Beach State after visiting and exposing the children to the Duncan Theatre.

“We believe in this place. We think it’s a wonderful opportunity for young people who have little prospects to suddenly have great prospects. That’s why we’re involved, and that’s why we’ll continue to be involved,” Winkler said.

Parker enthusiastically reaffirmed the College’s commitment to serve its three key constituencies: students and their families, the community and businesses.

“We will richly invest in each of our constituents to ensure a return for Palm Beach County and the state of Florida,’’ she said.

She said the college will be more strategic with its internal initiatives and strengthen its partnerships with businesses, Florida Atlantic University and others to ensure that students are academically prepared for a fast-changing, technology-driven workforce, equipped with the necessary people or soft skills to be effective in the workforce and involved in community service.

The speakers during the nearly two-hour ceremony highlighted Parker’s passion, tenacity and leadership and concluded that Palm Beach State College is in good hands with her at the helm.

She became the college’s first female president July 1, 2015, succeeding Dr. Dennis Gallon, who retired after 18 years and who assisted trustees with the investiture of Parker and the presentation of a medallion to her.

“When Palm Beach State College President Dennis Gallon decided to retire, I’ll admit I was a little bit nervous for the institution because we know that institutions are built on the foundations of great leaders,” said State Sen. Bobby Powell, Jr. “When it was announced that Dr. Parker would be leading this institution, I had a sigh of relief because I knew that she could take this institution to a greater level.”

The investiture ceremony concluded a week of activities that tied into the Feb. 27 opening of the College’s fifth campus in Loxahatchee Groves. Following the ceremony, there was an outdoor reception, fittingly on the Campus Commons behind the Administration building where Parker’s office is located.

The crowd streamed out of the Duncan Theatre and along a path that included the musical performances of Palm Beach State’s drumline, launched during Parker’s tenure, and a dancing panther mascot dressed in formal wear, to a huge tent with live music and food.