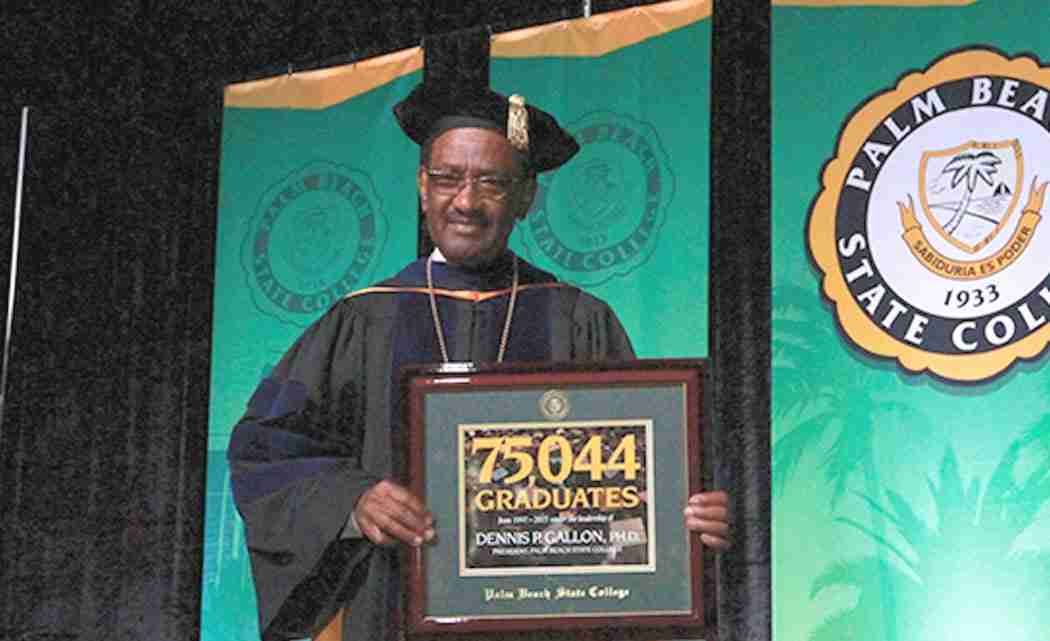 By TABATHA B. MCDONALD

LAKE WORTH — Palm Beach State College President Dennis Gallon delivered his final commencement remarks during two ceremonies May 11, telling the spring graduates that he hopes their time at the College was a “period of personal transformation that will never end.”

He shared his own story of being a high school student growing up in the rural town of Monticello, FL, with his mind set on being a professional drummer before attending college and discovering his passion for education. “You should have a script in life to follow, but you should also be willing to rewrite that script when it is determined that it is necessary,’’ said Gallon, who was one of eight children and the first in his family to attend college.

He also equated his personal feelings on ending a 50-year career in secondary and higher education with the journeys of the more than 2,800 spring PBSC graduates who will enter a diverse world that he encouraged them to embrace.

“You’re graduating, and I’m retiring, and we are both wondering what is next. It is an exciting place to be in life when you are moving forward to that next phase with a good education, and you have the determination and confidence in yourself to achieve your goals,’’ said Gallon, who will retire June 30. “You’re moving forward with an excellent education after having been taught by some of the most competent and caring faculty. So, I’m confident that you are prepared. As for me, I want to always be purposeful, and I will engage in that next chapter of life with that same excitement and determination as I have in this position.”

The two commencement ceremonies were held in the Expo Center at the South Florida Fairgrounds. With the spring graduates, Palm Beach State has awarded nearly 123,000 degrees and certificates since it was established in 1933, and more than 60 percent of them, 75,044 have been since Gallon became the fourth president in 1997. As part of the ceremony, Gallon was presented with a framed picture highlighting the number of graduates during this tenure.

Graduate Patricia Medina spoke at the morning ceremony for graduates of the Associate in Arts degree, and graduate Tia Barnett, who received her Bachelor of Applied Science degree, spoke at the afternoon ceremony for graduates of the Associate in Science, Associate in Applied Science, bachelor’s degrees and certificate programs. They both wowed the audience with their poignant remarks and tributes to faculty as well as family and friends who have helped them.

“They have challenged us, motivated us, mentored us, pushed us when we needed it and they cared about us because they are looking at us as the future,” said Medina, the student trustee and one of two PBSC winners of the Jack Kent Cooke Foundation Undergraduate Transfer Scholarship that pays up to $40,000 a year to cover her tuition.

“Palm Beach State College Panthers do not need saving. We are growing, striving and looking to leave our print on this town, in this county, in this state and in this world. We cannot be stopped,’’ Barnett said. “We may stumble, we may even fall, but we will get up and shake, shake, shake it off, and just like dust we will rise,’’ she said to thunderous applause.

Among the graduates were a mother and daughter duo, who both received their Associate in Arts degree, and countless students who overcame many obstacles to graduate. Rebekah Kurimski, 40, said she decided to go back to school after seeing that her daughter, Eryka Botelho, 19, was gaining college credits while she was in high school.

“I realized that she was going to graduate and I never would because I only had a couple of credits. I didn’t want her to beat me to the finish line, so we made it together,” Kurimski said. They both are planning to continue their education at Florida Atlantic University.