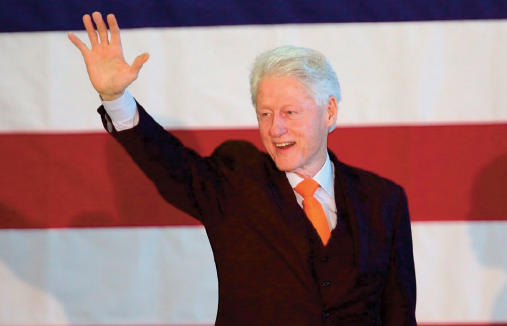 RIVIERA BEACH, Fla. – Former President Bill Clinton got rock star applause as he entered the room Monday at the Port of Palm Beach in Riviera Beach. Nearly 800 people packed the place and shouted and cheered as State Representative Bobby Powell, District 88, and the former president entered the stage together. Powell presented Clinton to the people to thunderous applause.

But ironically, Bill Clinton wasn’t even the people’s first choice! Presidential candidate Hillary Clinton, his wife, was supposed to be there. However, late last week, she cancelled and announced she was sending her husband, instead. She chose to campaign in     Nevada where the people will caucus on Saturday.

But Bill Clinton did not disappoint. In a thorough, 30-minute speech, he at times, addressed the black constituency directly, but spent most of his time outlining why Hillary Clinton should be chosen for the White House over her Democratic nominee rival Bernie Sanders.

“We need someone who knows how the world works, who’s committed to keeping big, bad things from happening,” he said, regarding the war on terror and her international experience.

“She makes everything and everyone she ever touches better. She will lead us (to a better place), if you’ll be with her.”

Addressing black voters, Bill Clinton said his wife has been on the front lines of the civil rights movement for decades. “It’s important that we listen to the ‘Black Lives Matter’ movement. I’m tired of seeing kids on television shot down. We need to stop that.” He also called for police reform. “We really need our police officers, but we need them connected to the communities they serve.”

The former president went on to explain that Hillary Clinton plans to create more jobs with higher wages. “We need inclusive economics,” he said, regarding the disproportionate distribution of wealth. “We need equality for everyone.”

He also touted her years of work promoting the expansion of health care. Sanders wants a universal, government-paid health care system, while Clinton prefers to expand on Obamacare, instead of starting over.

U.S. Congressman Alcee Hastings, who gave remarks prior to Bill Clinton taking the stage, said Bernie Sanders hasn’t gotten his policies enacted in all these years, and he doesn’t expect that to change, now that he’s running for president. “I know Bernie,” Hastings said, explaining that he served with Sanders for years in the House of Representatives. “He hasn’t been able to accomplish it at all for the whole time he has been there….As a senior (citizen). In the twilight of my years, I don’t have time for pie in the sky. I don’t have time for that. There comes a time when reality meets the rubber on the road. I’m for pragmatic politics. Hillary Clinton is your next president!”

Elmira Gilbert, at an amazing 100 years old, got a chance to shake hands with the former president. Her daughter, Gwen French, 70, a volunteer with Hillary’s campaign, said her mother knew very well who former President Bill Clinton was. Bill Clinton even said a few words to the centenarian. “It was a nice exchange,” said French, of her mother’s encounter with Bill Clinton Monday. “It was unbelievable!” said French. She said her mother told her she’s ready for a woman president.

Florida goes to the polls in its primary election on March 15. Bill Clinton said early voting is important. “This election is about whether we can go forward together,” he said.

Before Clinton took the stage, a few local groups got to perform. The Suncoast High School marching band of Riviera Beach, warmed the crowd up with it’s high-energy sounds and a local after school group called Faith’s Place Center for Arts Education band, also performed. The Hilltop Missionary Baptist Church Mass Choir, (of Riviera Beach), under the directorship of Jamil Davis, sang rousing gospel songs before Clinton appeared on stage.