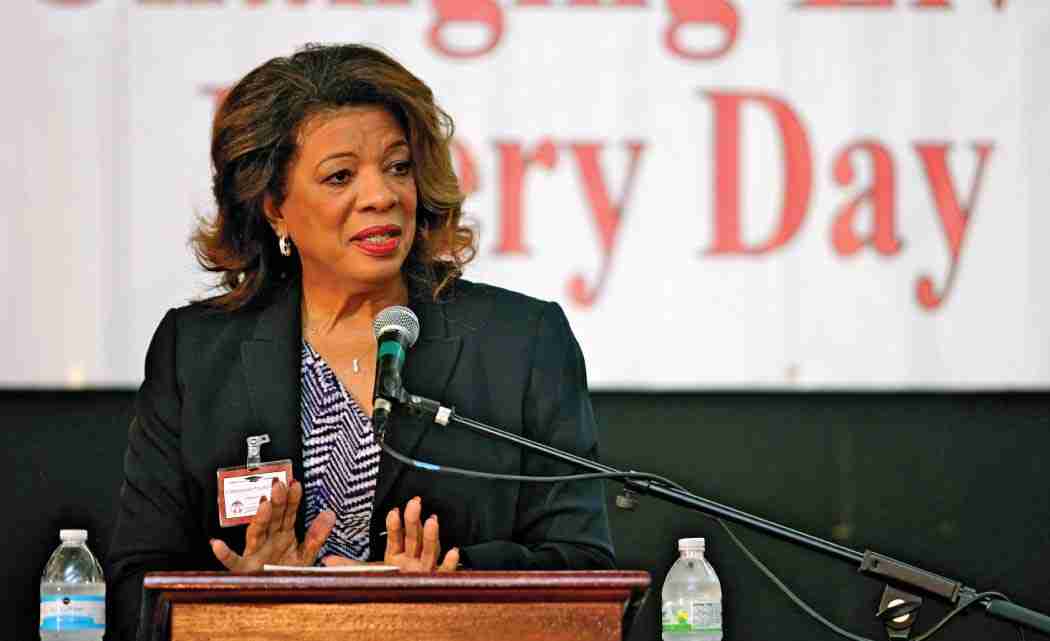 WEST PALM BEACH — The first African American female mayor of Palm Beach County took time to reflect on her time as head of the county recently and revealed that she is thinking about running for reelection in 2016.  Commissioner Priscilla Taylor said that equal and fair hiring practices for the county are a must and providing programs which benefit area youth is paramount as well.  She said that prevention and second chance programs will help adolescents and young people to achieve success.

Taylor said she wants to help provide homes for the homeless and to try to ensure that small businesses, many of which are minority and women owned businesses, have an opportunity to obtain contracts with the county.  “Diversity within the county, that’s been something that I’ve worked on before and I continue to work on,” she said.

“The day-to-day operations of the county is done by our county administrator, however if you know there’s something that you feel is not correct or that you question (as a commissioner), and one of the things that I have always questioned is the county not being diverse enough with their hiring.”
Taylor said one of the things she wanted to work on, even before she became mayor of Palm Beach County (November 2013 – November 2014), was a disparity study to help ensure that everyone who wants to do business with the county has an opportunity.  She said the disparity study is something that will be ongoing because the results of the study may also impact how county contracts are awarded.  “The hiring, as far as people working for the county, would be different,” Taylor said.  “They are looking at ways to see how they can diversify.  So as a commissioner, I still watch that.” West Palm Beach is also negotiating with a firm to conduct a disparity study for the city.
Frank Hayden, the procurement officer for West Palm Beach, said that information from the disparity study for the city could potentially help with hiring practices as well as how contracts are awarded for small businesses, women and minorities.  He said the study will look at the population in the city and in Palm Beach County. “I think that with the disparity study, it will enable the city to establish programs that will benefit minority owned firms, primarily small businesses,” Hayden said.  “We have made some improvements to our small business program.  One (specific) improvement to the program is the sheltered market component.”  With the sheltered market component, the city can identify projects that only certified small business enterprises or SBEs can participate in or can compete for in terms of contracts.  Hayden said if the study comes back the way the city thinks it will, and shows that there has been a disparity, especially among African Americans and Hispanics, then West Palm Beach can turn the sheltered market program from a small business component into a minority business component.  He said if that turns out to be the case, the only company that could bid on that work or provide the city with services for that project would be a minority owned firm.
Taylor said that the county cannot set aside jobs or contracts for minorities because that is illegal. However, the disparity study will help identify areas where diversity could possibly be improved in hiring individuals and awarding contracts with Palm Beach County, she said.  Taylor said that when applicable, she would like to see small businesses have the same opportunities to bid on contracts with the understanding that many small businesses are owned by minorities.
Hayden said that he does not know how the disparity study would impact hiring, but he thinks there is absolutely no doubt, with the way West Palm Beach is growing, if the disparity study comes back with the information the city expects, it will definitely open up the doors and create many opportunities for minority and women owned businesses to obtain some city contracts.
The disparity study for Palm Beach County probably won’t be finished until next year, Taylor said.  She said she will probably run again for county commissioner in 2016, which if she wins another four-year term, it will be her last on the commission due to term limitations.  “One of the things I will continue to push for is equality,” Taylor said.