Protest in the Everglades 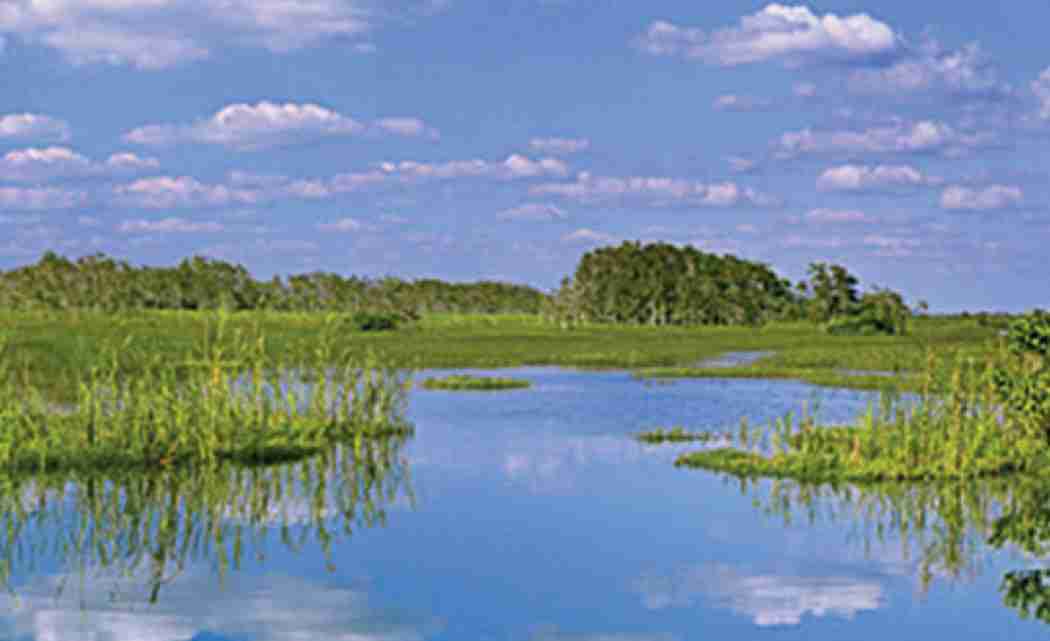 For five history-making days, from March 28 through April 2, at the ambitious rate of 15 miles per day, upwards of twenty intrepid marchers actually walked the 75-mile distance from the eastern edge of Naples to the western edge of Miami, across the fragile ecosystem of the Everglades  along Tamiami Trail (US 41), in a Native American-led demonstration “for the Defense, Protection, and Survival of Mother Earth,” and as a protest specifically against plans to build a 12-14-foot-wide bicycle and hiking path called the “River of Grass Greenway” (ROGG) adjacent to the existing highway.

On day five, the final stage of the march, the weary and footsore but determined walkers were  saluted by waves and horn- honks from motorists on Tamiami Trail as the colorful gathering approached Miami, carrying a staff with sacred feathers, tribal flags and placards with such slogans as “No Bikeway across the Everglades,” “Restore the Everglades, not Exploit it” and “Imagine letting the Everglades Restore Itself,” as they acknowledged the honks and arm waves of support.

The long march concluded on the grounds of the Miccosukee Resort Hotel and Casino with the walkers forming a circle for a solemn ceremony led by clan and spiritual leader Bobby C. Billie, a member of the Council of the Original Miccosukee Simanolee Nation of Aboriginal Peoples, after which several of the five-day walkers, some in obvious pain, others “ready for another 100 miles,” shared their thoughts, all unanimously and firmly resolved that the proposed Bikeway will not be built.

The proposed ROGG was conceived as a way to make the Everglades more accessible and appreciable to cyclists and hikers, as a safer and better alternative to rushing through this unique natural treasure by automobile, by a group of bicyclists in Naples. They assert that the new construction, now estimated to cost as much as $140 million, will have minimal environmental impact. The bicyclists dismiss the fears of protestors that the new construction will bring such unwelcome changes as electricity, restrooms, and other amenities which will only open the way to further development, and destruction of the natural habitat.

The Native Americans and their allies, however, with a long historical record to justify their skepticism, insist this project presents many concerns of its own, like the (further) interruption of wildlife migration patterns and the free southward flow of water through the “River of Grass” from Lake Okeechobee to the ocean, and is but a small part of a much larger issue and problem regarding our relationship to the earth.

Many of those testifying at the end of the walk echoed the sentiments of Mr. Billie, who opened the discussion by observing that the world today is one of disrespectful children disturbing and attacking their Mother, the earth, and reaffirming the urgency of ceasing and desisting from our current practices so as to heal and repair the damage wrought by centuries of uncaring abuse and imbalance.

Protestors shared reminders that the Everglades is not a spectacle to be viewed by outsiders, whether on bicycles or in cars, but part of a complex, delicately balanced system of which we ourselves are also an integral part, and that “greenways” are generally reclaimed lands, like railroad corridors, made into green spaces, rather than natural areas being invaded by concrete.

The fervor of the testimonies, the diversity of the backgrounds of the participants, their valiant commitment to walk the 75 miles (joined by others on separate days), and their overriding vision of the larger, global context of the protest would all seem to confirm late anthropologist Margaret Mead’s famous reminder to “Never doubt that a small group of thoughtful, committed citizens can change the world; indeed, it’s the only thing that ever has.”

Although immediate results of such efforts are rarely evident, it cannot be doubted that this 75-mile trek across the precious Everglades (symbolically during Holy Week of the Christian calendar; one participant even thoughtfully arranged for a much-welcomed Holy Thursday washing of the feet of the walkers after their long march), signals a new day for South Florida, as the region confronts the growing environmental  challenges of sea level rise, threats to the Biscayne Aquifer which provides our drinking water, and other pressing issues.

Indeed it was significant that so many of the participants in the walk shared deep concern with the urgency of improving our legacy to future generations, as an appropriate awareness of the Native American proverb, “We do not bequeath the land to our future generations, we borrow it from them.”

Previous post Open Letter to ‘60 Minutes’ on its Africa reporting