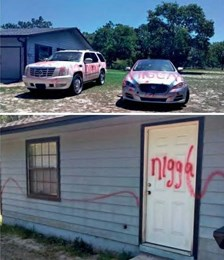 Homeowner Nakea Darisaw, who lives on East Highway 25 said she woke up Friday morning to find her entire home and vehicles spray painted in red.

BELLEVIEW, Fla. (AP) — Florida deputies are investigating racial slurs that were found spray-painted on a woman’s vehicles and home.

Belleview resident Nakea Darisaw tells news outlets that her phone line was also cut. “Go” was spray painted on her door, and slurs demeaning African Americans were written on the cars and building. Someone also flattened Darisaw’s tires, keyed her cars and broke both windshields.

The Marion County Sheriff’s Office is investigating the case as felony criminal mischief. The case could be elevated to a hate crime if deputies prove the family was targeted because of their race.