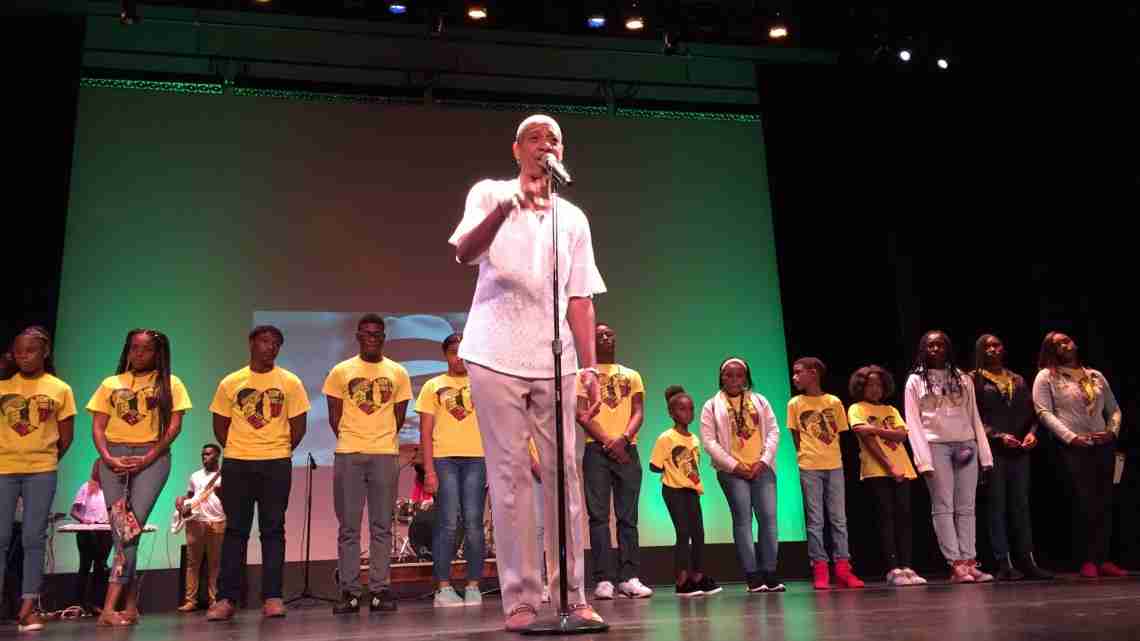 During an anniversary event entitled “She’s Still Soaring,” the powerful wordsmith commemorated 15 years as a full-time professional poet and 20 years in the spoken word arts overall.

“It has been a journey. The idea of me surviving off of just speaking some words … I had to thank South Florida because it’s hard for artists to survive and be successful at home,” Vaughns told theSouth Florida Times. “Most artists become successful once they’ve gone and toured the world and made it into the magazines and stuff like that, but I’ve literally been successful right here at home.”

The program began with a slide show of some of Vaughns’ most beautiful moments. Then dancers, singers and poets of various ages took the stage to pay tribute to a woman who selflessly shares her gift of gab to improve the lives of others. 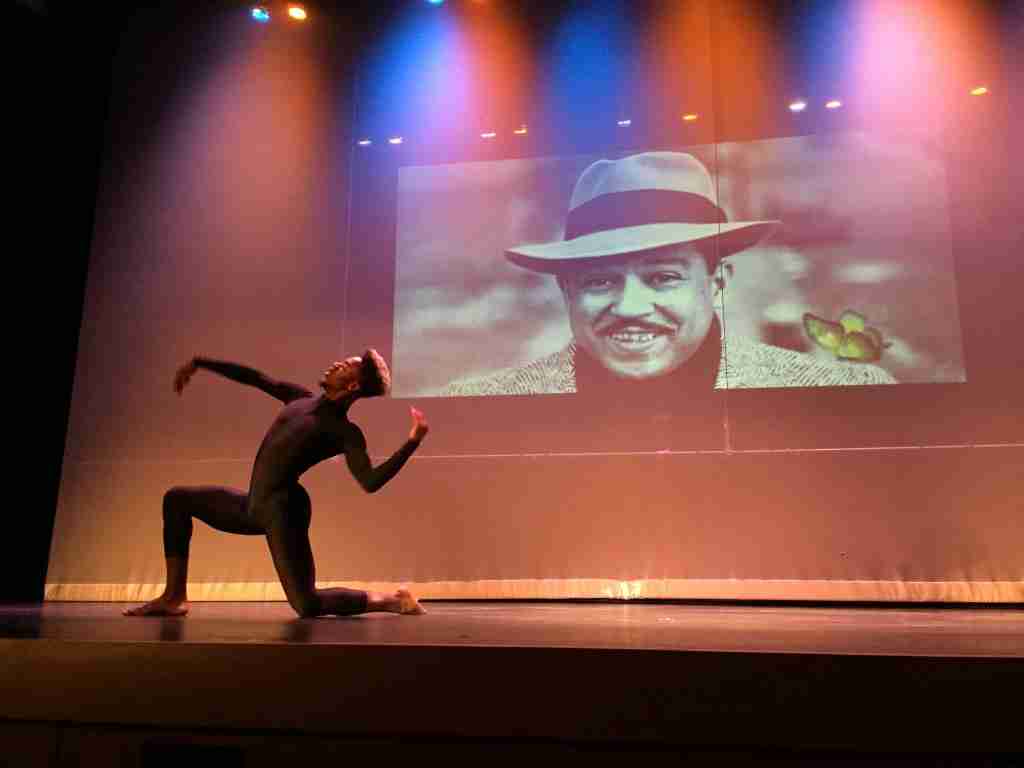 Kameren Whigham dances to the classic “Black Butterfly” to pay tribute to Vaughns.

Each performer shared how Vaughns had inspired them to chase their dreams and be better people. Attendees shared their sentiments.

Madeliene Haddocks, who Vaughns calls her “number one supporter,” said the poet is one of a kind.

“She’s so awesome. She has a gift and she spreads it. She can come up with something on the spur of the moment,” Haddocks said. “She’s a natural and she’s very generous with her talent because sometimes she performs without pay. She’s a beautiful soul.”

Rachel Tourgeman, the community relations director for Florida National University, said she has known Vaughns for 26 years. She commended her for transforming people’s lives through her poetic performances.

“Butterfly is intrinsically a breath of fresh air for our children, youth, adults and entire human kind. Her positive messages transcend all generations and all demographics,” Tourgeman said. “No matter what morally compelling issue Butterfly is addressing, she reaches the souls and minds of all those who have the privilege of seeing and hearing her.”

Dr. Alan Silver said it was important he attend to support Vaughns because she pours into the next generation.

“She has a special way to convey a message and they’re normally gravitated towards kids. I’ve watched her. Before she goes up, she mingles with the kids and gets a feel for them,” Silver said. “Then she goes up and she gets all the kids to relate to what she’s saying.

When she starts talking, she grabs the attention of everybody. She’s definitely very special and definitely blessed by God.”

“I’m not even a poetry fan, but I’m a Butterfly fan,” said Felicia Martin, the host of the evening.

Once the tributes were complete, Vaughns herself took the stage and, as usual, captivated the audience with her words. She said she was grateful to have the opportunity to do what she loves for the greater good.

“When it comes to poetry to each’s own, but I’m about using my voice for upliftment (sic), the betterment of the world,” Vaughns said. “When you have people on oxygen tanks just trying to breath, I don’t see myself wasting my oxygen.” 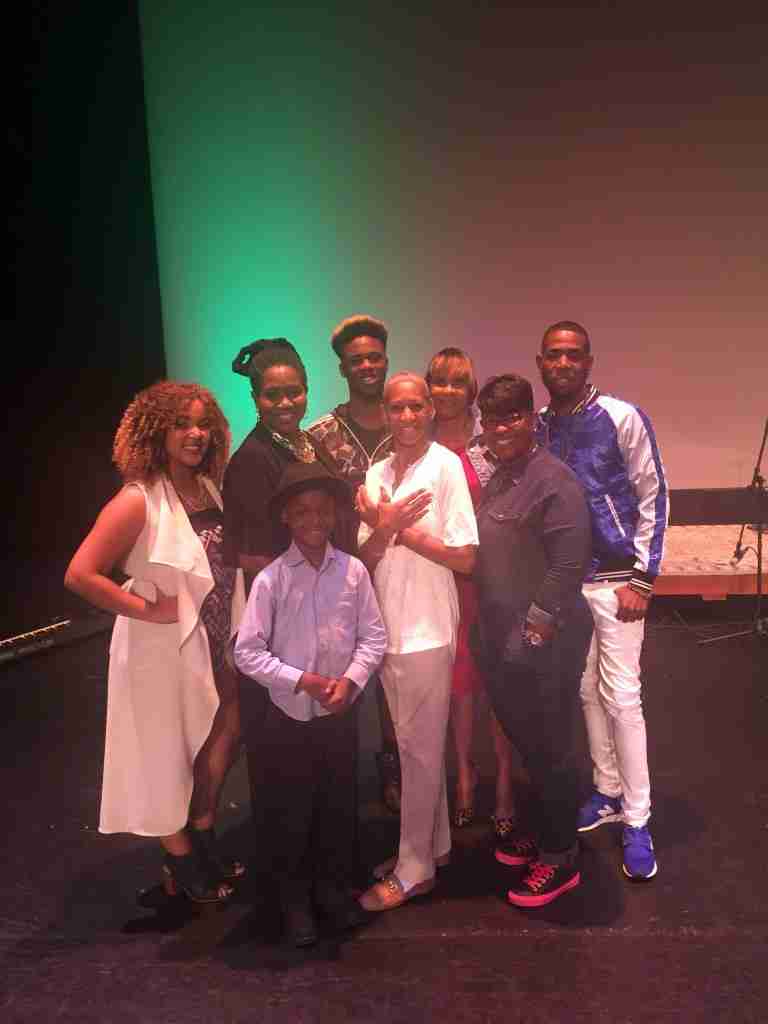 She also encouraged people to have the confidence to pursue their passions.

“A lot of people walk around still pregnant with their goals and their visions and their dreams inside. The beautiful thing about our Creator is that there are 7 billion people in the world and none of them have the same fingerprint. Believe in yourself because when you believe in you it shows,” Vaughns said.

After the program, there was a delicious spread of food available for guests, as well as music provided by two talented saxophonists.

Free to the public, the event was sponsored by Wright & Young Funeral Home, who promoted their “Don’t Take My Life Let Me Live” program aimed and stopping senseless murders in local and national communities.

Vaughns said she was very happy with the way the event turned out.

“The vision literally materialized in the manner that I hoped it would. It really came together beautifully. I don’t like tradition and I don’t like the idea of expectancy … The people who came out tonight, I could never put it into words how much it means to me.

It’s not how many show up, it’s who shows up in spite of. … I’m going to sleep so sweet tonight,” Vaughns said.

Right picture: Rebecca ‘Butterfly’ Vaughns, center, with friends and loved ones who came out to pay tribute to her during her poetic anniversary.