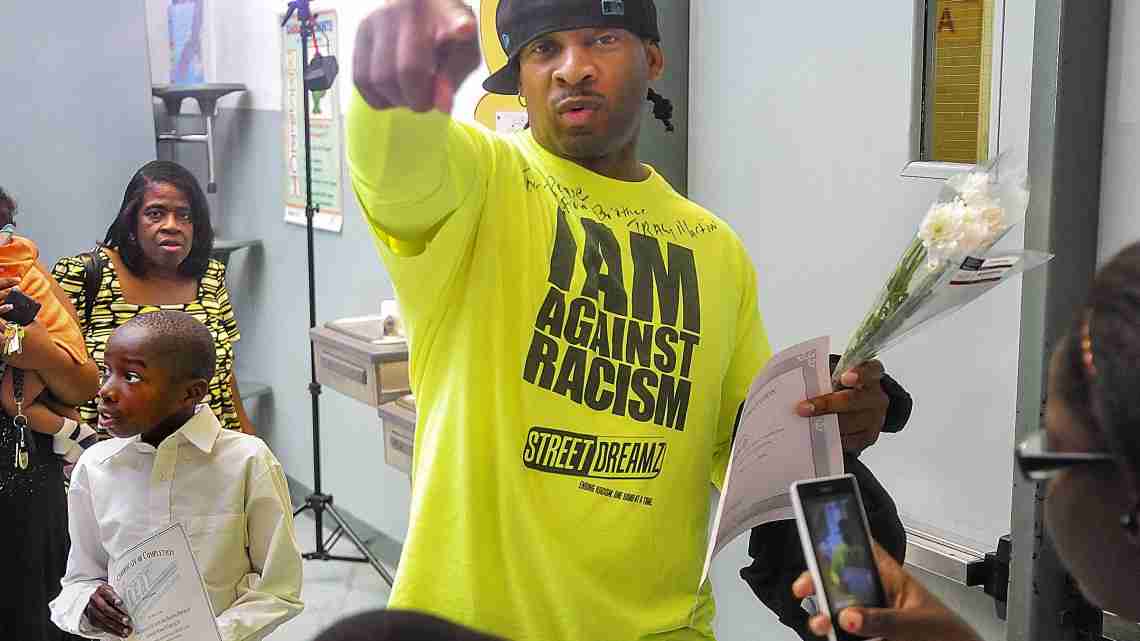 WEST PALM BEACH, Fla. – “Reggie Dee,” on-air personality at X102.3FM in West Palm Beach, is a fun-loving, vivacious radio announcer. But this deejay, who started in Dallas as a mixer, has a serious spot in his heart as well. He wants to eradicate cancer, which claimed the life of his mother; he hates racism, as demonstrated by his “Walk Against Racism,” from Dallas to Florida in 2015, and now he’s embarking on a cross-country walk for unity next month.

Seattle. He estimates that’s some nine million steps and should take about 90 days.

“God has told me, if you want to be a motivational speaker, or an entrepreneur – you have to step out there and show the people. So, I lead by example,” he said.

This time, he’s on a mission to bring people together via the walk, which will begin August 11 from the Martin Luther King Memorial statue in West Palm

Beach on Flagler Drive. There, he’ll be presented with a commemorative brick on the ground with his name emblazoned on it before trekking to the Stuart NAACP, where Dee said he will partner with famed attorney Willie Gary, whose headquarters is in Stuart. He plans to attend church with Gary before leaving the city.

“I got to get my blessing as I embark on this journey,” he said.

When the last hurricane-devastated Haiti, Dee convinced Cheney Brothers, Inc. a West Palm Beach based international company, to give him one of their semi-trucks and he placed it at a mall. In less than 24 hours, it was full of donated items that he shipped to Haiti. When a fan and supporter was fighting cancer, he allowed her to shave his head so she wouldn’t face baldness alone.
Patrick Franklin, President and CEO of the Urban League of Palm Beach County, is one of his biggest supporters. Franklin calls Dee a “difference maker. He wants to effect change, and he has done that,” said Franklin. “I’m a supporter of his efforts in eradicating racism and now his call for unity. This is a tremendous effort, physically and mentally. He’s taken some steps locally, then he walked from Dallas, and now this is even farther. I’m certainly in support of him and all his outstanding efforts.”

The walk, which will be about a threemonth stretch, is expected to be treacherous. He’ll walk over rough terrain, through mountains and valleys. He has scheduled stops along the way to take breaks as he makes his way from West Palm Beach up through the Midwestern states and then to Seattle.

During his Walk for Racism several years ago, he was bitten by a dangerous spider and ended up in the hospital. The doctors said it could have been deadly. “I totally ignore the difficulties,” he said.

This time, sponsors have provided him with high tech engineering products and gadgets to help make the walk easier to navigate. He has even been given a stateof the art drone to help navigate his path, compliments of an engineering firm located in the same building as the radio station. After the CEO of T-Mobile learned about his efforts, the company contacted him and is now his major sponsor.

In his last conversation with his mother before she succumbed to cancer, Dee said he told her he wanted to do a walk to stamp out cancer. She said no but asked what else bothered him and he told her racism. That’s how the Walk Against Racism was born. She told him that whatever he embarked on in life, she would be right there watching over him. Since then, he said she has given him signs when he felt like quitting.

“The racism walk was inspiring, but this one has even more of a positive connotation,” he said. “Yes, this is about publicity, but this is not a stunt. The big picture is unity. I’m building a huge database and I’m asking the people to join me. Walk a mile, walk a day, a week, whatever you wish. Take steps around your neighborhood, on your job. Just join me any way you can.” he urged.

For more information on how you can join Reggie Dee on the Walk for Unity, visit the webiste Takingstepsforunity.com.