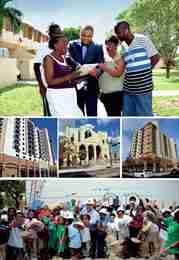 SOUTH FLORIDA – Many might agree that it is challenging if not impossible to recreate Black Wall Street. In the early 1900’s, during a time that was difficult for the Negro race, blacks created a thriving black community in the Greenwood section of Tulsa Oklahoma that has yet to be duplicated. Reports say that six blacks owned airplanes, black doctors opened medical schools, there were two movie theaters and hundreds of thriving black businesses. The area was so successful, they dubbed it “Black Wall Street,” and also referred to it as a mini Beverly Hills.

The town was so amazing economically, that it was said whites were jealous, and in the worst massacre upon the black race in United States history, the Ku Klux Klan and residents reportedly burned Black Wall Street to the ground. Homes, black businesses and residents were left in flames and smoldering. The black hospital too, went up in flames leaving nowhere for the injured to go. The race riots of Tulsa on that fateful day of June 1, 1921, desecrated the most successful black community to date.

Although no one was ever officially held accountable for the de- struction of Black Wall Street and no reparations to date have ever been paid, some scholars say the best thing blacks can do to preserve Black Wall Street’s rich history, is to create other thriving black communities throughout the United States.

In South Florida, there were thriving black communities prior to integration in the 1960’s, but most of them were phased out with the onslaught of blacks moving to other areas in a mass exodus during integration.

But today, there are significant projects underway to rebuild what was once black communities that were hustling and bustling with top name celebrities coming in, black doctors, lawyers, and businesses of nearly every kind. From Miami’s Overtown to Fort Lauderdale’s Sistrunk Corridor, West Palm Beach’s Northwest community and Riviera Beach’s Mariana, businesses in the black sections of town are once again on the rise through major projects and Community Redevelopment Agencies.

Clarence E. Woods, III, Executive Director of the Southeast Over- town/Park West Community Redevelopment Agency (SEOPW CRA), said his CRA is overseeing a $2 billion development project called Miami World Center. It’s a mixed use development of high end residential condos, hotels, retail and office space that will once again rebuild the Overtown area, which was once known as “Little Broadway,” for its entertainment hub with performers such as Duke Ellington, Ella Fitzgerald and many other notables.

The mission of the billion dollar project is to help restore the area and turn it into an economic oasis. “This is a big job initiative that will be done in three phases and it’s already gotten started.” It should be complete within five to eight years,” he said.

Miami Commission Chairman and SEOPW CRA Chairman Keon Hardemon says Overtown is experiencing something of a rebirth. “Overtown is experiencing a renaissance. This community was once the economic hub of black Miami. It was home to black-owned businesses ranging from clubs, restaurants, and hotels to lawyer’s and doctor’s offices. All that you needed could be accessed within the boundaries of this neighborhood. This offered residents of the area a better quality of life while also attracting visitors into its community. That model is something that we in the SEOPW CRA want to emulate. Our goal is to make Overtown a community where you can live, work, and play. We can achieve this utilizing a myriad of strategies but especially by attracting and helping to develop more businesses,” he stated.