Reward for information about teen’s shooting increased to $10,000 at community forum 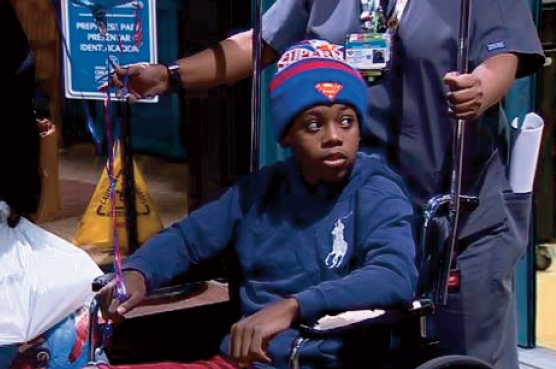 In an effort to encourage community members who might have knowledge about the Dec. 28, 2015 shooting of 13-year old Eric Watson Jr., Miami-Dade County Commissioner Dennis C. Moss, County Mayor Carlos Gimenez and Crime Stoppers have come together to offer a $10,000 reward for information leading to the arrest of the person responsible. Eric’s shooting occurred one day following the shooting death of seven-year old Amiere Castro in the same community. Suspected gunman Dravein Duke, 19, known as “Pop,” surrendered to Miami-Dade police. Maxwell Trewin, 18, identified as the getaway driver, has also been arrested.

The announcement regarding the reward for Eric’s shooter was made at a recent Naranja Community Town Hall meeting held at First St. John Missionary Baptist Church, in close proximity to where the honor roll student was shot three times in his chest while visiting his grandmother’s home. The shooting happened about 7:30 p.m. at 13624 SW 263rd Terrace.

“Somebody knows who did this,” Commissioner Moss said. “We want you to know that we are serious about apprehending the community terrorist who shot Eric. We need to reclaim this community. If you shoot         innocent people, especially our children, we won’t rest until we bring you to justice.”

What began as a $5,000 pledge by Commissioner Moss and Crime Stoppers Executive Director Richard Masten, was matched during the event by Mayor Gimenez, making the total reward $10,000.

“We have a great police department,” Mayor Gimenez said. “But when we don’t have the information, it makes it much more difficult for the police department to keep you safe. If you know something, let us know and we will do the work. Our goal is to make this county the safest place in the world to

“When you walk out of the door at this church,

you can almost see where 13-year-old Eric Watson Jr. was shot,” added Commissioner Moss. “That is why I wanted to hold the Town Hall meeting at this location. We need to send a strong message to the community that we are concerned about what is happening and we are not going to tolerate this. Working together, we can make a difference for the betterment of all.”

Police are asking anyone with information about the shooting to call Miami-Dade Crime Stoppers at 305-471-8477.

Next post Throw a Super Bowl party without breaking your budget