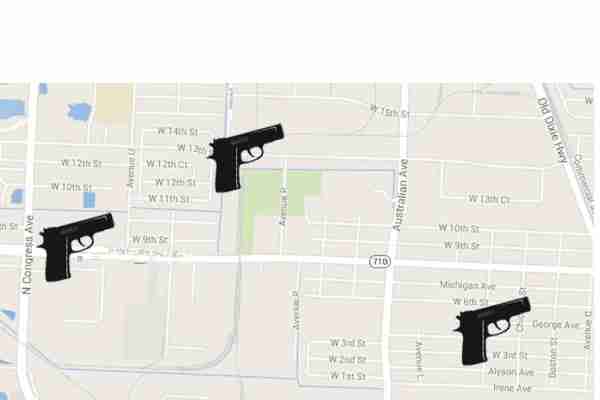 RIVIERA BEACH — In a town that’s fighting an image that it is has excessive crime and violence, shots fired and injuries in three locations on the same day almost a month ago, didn’t help.

It was widely speculated that the shootings were just another rash of violence in Riviera Beach, a city that’s seen too much over the years. Panic swept the community, when somehow it was reported that mad men were on the loose, randomly shooting people in the city and that residents were urged to stay inside.  It was also reported that the police department had called on all units to bring order to the city.

Those allegations were false, according to Police Spokeswoman Rose Anne Brown. And the shootings were related and attributed to an act of retaliation between those involved, she added.

On Aug. 9, there were three shootings in three separate locations in the city. On that day, Brown said, a dispute had apparently taken place elsewhere, but one car followed another, and the dispute culminated at the corner of Martin Luther King Jr. Boulevard and Congress Avenue; shots were fired, leaving one man dead and four injured. Sometime thereafter on Fifth Street, someone drove by and fired shots at individuals outside of a home, injuring them. In a third incident, in the 1200 block of Avenue R, again, individuals outside of a house were shot by someone who drove by. They too were injured. Brown said there previously had been drug sales at the house on Avenue R.

“We immediately got information that tied the events together,” said Brown. “This was not a surge in crime. It was a related incident. It remains under investigation because we have not made the arrest that we intend to make in this case,” she said. “We expect to make an arrest soon.”

Still the uptick in crime concerned the Black Educators Caucus of Palm Beach County which partnered with the Black Youth Enrichment Association to bring Dr. Umar Johnson, a Philadelphia-based expert in the education of students of color, to address violence among young people of color. Johnson said the key to fighting violence is getting a proper education and, for that, parents need to be held accountable. Johnson said young black boys join gangs because they are looking for a surrogate family. “To eliminate this, give them a strong black male teacher,” he said.

Parents, he said, can demand what they want for their child in the classroom. This, they must do, because the world is looking at their black male child as a criminal regardless of their age. “The black boy in American society is considered a criminal, whether he is 3 or 33,” he said.

The community conversation was held Aug. 17 at Suncoast High School. The Caucus is concerned that some of this violence may spill into the public schools.

“We want to avoid that,” said Ronald Leonard, Caucus president.

“For years, the City of Riviera Beach has worked very hard – and has been very successful – in reducing crime within the city limits. In fact, the Florida Department of Law Enforcement (FDLE) crime statistics over the past 16 years show clearly the city’s efforts are working. The crime rate has dropped by 68 percent since 1998 with steep drops in both violent and property crimes.  Despite a spate of recent shootings on Aug. 9, there is clearly no spike in crime, but rather a steady decline in crime. Those informed and those who truly know the city know that Riviera Beach is steadily becoming a safer place to live, work and play,” Jones said in a statement.

City officials have done much recently to shed an image of crime and focus on its massive revitalization and redevelopment plans. A $375 million redevelopment of the city’s marina is now underway, which officials expect to be a worldwide draw to the city. The redevelopment is expected to change the face of Riviera Beach, officials say. In March, voters passed a referendum allowing the redevelopment of the marina to move forward and in April there was a groundbreaking ceremony. The first phase of the development, which is expected to be completed by fall of 2015, will include a two-story events center, with a main ballroom named Newcomb Hall that will seat 300 people. The center will also have smaller meeting rooms for community groups, a restaurant, a café and a rooftop terrace overlooking the water. This phase will also include a $4 million makeover to Bicentennial Park, which will include a stage for concerts, a fountain in which kids can play and concessions. With the advent of the new plans, officials say it’s a new day in Riviera Beach and the city will become a world-class destination.

“A lot is happening in Riviera Beach. The perception of high crime is outdated and oversimplified, and the city leaders working to put that perception behind them and move Riviera Beach into the future,” said Jones.