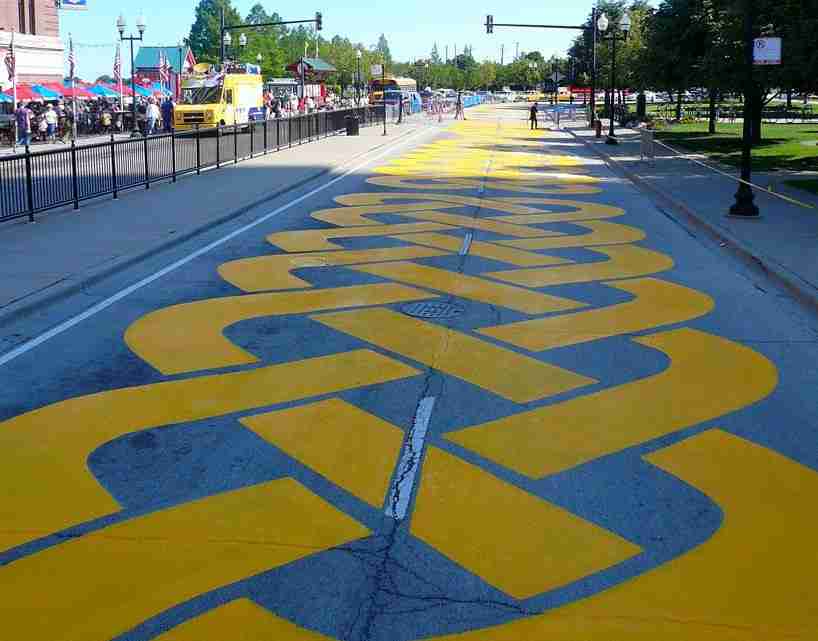 Artist and activist Steed Taylor will use “road tattoos,” to connect areas of West Palm Beach.

“Steed Taylor’s road tattoo is one of several ways the City is working to rejoin the Historic Northwest and the Downtown,” said West Palm Beach Mayor Jeri Muoio. “It’s our hope that, by walking the length of the installation, residents and visitors will better connect with the public spaces in our City and also other neighborhoods and communities.”

Three designs will be created and mixed throughout the length of the planned mural: Genii Loci will be a 1.2 mile, three color design that includes Florida native flowers and plants; a braided Celtic design symbolizing connectedness; and, at the entry point to the Historic Northwest district, the musical scale and notations representing the jazz standard “Round Midnight.” Genii Locii is expected to be the longest street tattoo ever made to showcase the power of the community.

The art will also achieve three goals suggested by Gehl Studios with whom the city contracted to find ways to improve quality of life of residents in our community.

The three goals include:

• Creating a safe and interesting crossing at Rosemary and Banyan Boulevard;

• Utilizing art as a tool to create an eye catching path along Rosemary;

• Implementation of traffic calming measures on Rosemary through alternative methods.

The creation and installation will run through May 1. It will feature the work of several local artists, students, and community groups who will lend their hands and creativity to the painting. Born near Fayetteville, North Carolina and educated at the University of North Carolina at Chapel Hill (BA in English and Studio Art concentrating in intaglio etching), and American University in Washington, DC (MBA in Marketing) and the Skowhegan School for Painting and Sculpture, Steed Taylor’s art practice includes public artwork as well as work for gallery settings.

His art has been shown around the country including the Bronx Museum, the Mint Museum, the San Bernardino County Museum, and the Neuberger Museum of Art’s 2001 Biennial Exhibition of Public Art. Besides extensive showings in the New York metropolitan area, his solo shows include The University of the Arts in Philadelphia, Ambrosino Gallery in Miami, Florida and Il Ponte Contemporanea in Rome, Italy.

Next post Domino's will deliver to beaches, parks and "hotspots"