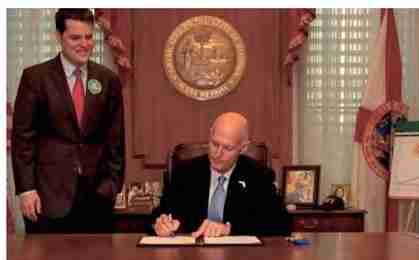 TALLAHASSEE, Fla. – Florida legislators passed 279 bills during this year’s session three months ago, and 161 of them took effect on Friday with the start of the state’s fiscal year, affecting school choice, rape kit testing, tax cuts and many more aspects of life in the Sunshine State.

A law redefining when abortions can be performed and preventing state funds from going to an organization that also provides abortions will not take effect as scheduled, after a federal judge issued a temporary injunction late Thursday. The move comes after a Texas law restricting abortions was declared unconstitutional by the U.S. Supreme Court ruling on Monday.

Here’s a roundup of some of the measures taking effect:

BUDGET: The $82.3 billion budget was passed by a combined vote of 159-1. It includes more than $700 million for school construction and $203.8 million for Everglades restoration. TAX CUTS: Two will benefit most Floridians. Property taxes should drop along with a reduction in in local millage rates, and a three-day sales tax holiday Aug. 57 should help back-to-school shoppers.

BULLYING: School districts must review their anti-bullying and harassment policies every three years, and integrate rules on dating violence and abuse into discipline policies. CRIME AND PUNISHMENT: Persons convicted of aggravated assault or attempted aggravated assault are no longer subject to “10-20-Life” mandatory minimum sentences. JURY DUTY: Individuals permanently in- capable of caring for themselves may request a permanent exemption from jury duty by submitting a written statement from a doctor verifying the disability.

NEEDLE EXCHANGE: The Miami-Dade Infectious Disease Elimination Act (IDEA) provides for the University of Miami and affiliates to establish a pilot needle exchange program to prevent the spread of blood-borne diseases such as HIV, AIDS, or viral hepatitis in the county, which has the nation’s highest rate of new HIV cases.

PUBLIC RECORDS: Recorded matches regulated by the Florida Boxing Commission may be kept private until they are aired in an exemption requested by Ultimate Fighting Championship for its “Ultimate Fighter” reality show when it is taped in South Florida.

RAPE KITS: Law enforcement agencies must submit rape kits within 30 days of the start of their investigations to a state crime lab, which must test them within 120 days.

SCHOOL CHOICE: Children can trans- fer to any state school with available space, and student athletes are immediately eligible to play if they haven’t joined practices in the same sport at their previous school. Children of military parents or those who transfer due to economic or legal reasons are immediately eligible in season if they haven’t been suspended or expelled from their prior school.