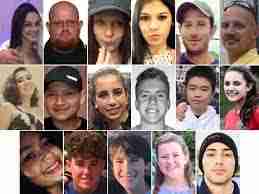 SUNRISE, Fla. – A commission investigating the Florida high school massacre heard Tuesday the suspect’s late mother allowed him to buy a gun even though his mental health counselors opposed the idea and agreed that a diversion program for students who commit minor on-campus crimes played no part in the shooting.

“If he wants to have a gun, he could have a gun,” Gualtieri said Lynda Cruz told his counselors. Lynda Cruz died in November of pneumonia, three months before investigators say her 19-year-old son killed 17 at the school on Valentine’s Day, shooting throughout a three-story classroom building with an AR-15 semi-automatic rifle. His father died when he was young.

Gualtieri told members that school and mental health counselors had at least 140 contacts with Nikolas Cruz over the years trying to get him help, but his mother frequently interfered. He did not go into specifics. Similar complaints were made about the mother of Adam Lanza, who killed 26 at a Connecticut elementary school in 2012 after killing her.

Nancy Lanza bought guns for her 20-year-old son despite his severe emotional issues.

The commission is scheduled to discuss his mental health treatment in a closed session Thursday as those records are protected by federal and state law.

School and government records obtained by The Associated Press and other media shortly after the shooting show Nikolas Cruz was diagnosed as developmentally delayed at age 3 and had disciplinary issues dating to middle school. In February 2014, while in eighth grade, Nikolas Cruz was transferred to a school for children with emotional and behavioral issues. He stayed until 10th grade, when he was transferred to Marjory Stoneman Douglas High School.

About a year before the attack, Nikolas Cruz was kicked out of the school after he harassed other students, had emotional outbursts, fought and had numerous other issues. He was sent to an alternative school.

On Sept. 28, 2016, an investigator from the Florida Department of Children and Families visited Nikolas Cruz and his mother after he posted video on Snapchat showing him cutting himself. The report showed he had written a racial epithet against African-Americans and a Nazi symbol on his book bag, which his mother had forced him to erase. The investigator said Nikolas Cruz was suffering from depression and on medication and had told Lynda Cruz he planned to buy a gun, but she couldn’t determine why.

Also, the commission agreed Tuesday that Cruz’s participation in the Broward County school district’s Promise Program in 2013 played no part in the shooting. The program has come under criticism for leniency and because of questions over whether the teen completed the program, particularly among conservatives.

But Gualtieri, a Republican, called the issue “a red herring” and that Cruz’s participation would not have prevented him from buying guns.

Records show that Cruz was referred to the program as an eighth grader in November 2013, just a few months after it began, after he broke the handle on a bathroom faucet. Under the Promise Program, students who commit minor crimes or conduct violations like minor vandalism, petty theft, harassment and fighting are referred to the off-campus program for two-to-10 days, depending on the offense’s severity. They are assessed, given a course of treatment, attend classes and receive counseling aimed at changing their behavior. Records show that almost 90 percent of Promise participants never reoffend, Gualtieri said.

Records are inconclusive on whether Cruz actually attended Promise or skipped the assignment school officials originally said he was never referred to the program, but later said they found records showing he was. But Gualtieri said even if the program didn’t exist and Cruz had been charged criminally for breaking the faucet, at most he would have been given a sentence of public service.

“Breaking a handle off a faucet had nothing to do with this shooting,” Judd said.

But Judd and other commission members did make several recommendations for improving the Promise Program, including combining school and criminal records so officials can get a full picture of a juvenile’s behavior. Cruz did not have a juvenile or adult criminal record before the shooting, but his mother did call deputies to their home about 20 times for behavior issues including threats and possible battery. The commission will later discuss how those incidents were handled.

The commission brings together law enforcement, education and mental health officials along with legislators and the parents of student victims. It will prepare a report by Jan. 1.

Cruz is charged with 17 counts of first-degree murder. His attorneys have said he would plead guilty in exchange for a life sentence without parole. Prosecutors are seeking the death penalty.